BY Heather Hughes on September 14, 2018 | Comments: one comment
Related : Soap Opera, Spoiler, Television, The Young and the Restless 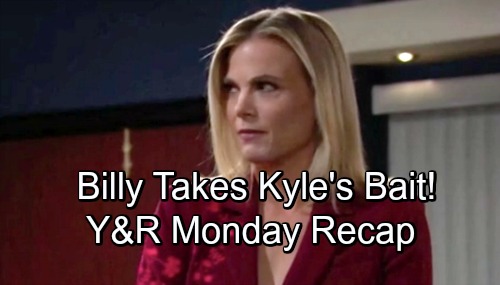 The Young and the Restless (Y&R) spoilers update and recap for Monday, September 17, tease that Kyle (Michael Mealor) will make a sneaky move. He’ll call up a pal who’s involved with some bookies. A little later, Billy (Jason Thompson) will receive an invitation by email. He’ll realize he can join an elite gambling circle, so he’ll certainly be tempted.

Across town, Abby (Melissa Ordway) will rant at Rey (Jordi Vilasuso) over all the Dark Horse launch drama. She’ll gripe about the negative press coverage and push Rey to release a statement that clears Nick (Joshua Morrow). Rey will put up a fight at first, but he’ll ultimately cave in. However, he’ll assure Abby that he’s not backing down on the J.T. (Thad Luckinbill). Rey still wants some answers!

Meanwhile, Summer (Hunter King) will seek some guidance from her dad. Nick (Joshua Morrow) will learn that she’s been taking someone for granted. He’ll urge Summer to make things right, so she’ll dash off to try. After Summer tracks down Kyle, she’ll apologize for hurting him and talk about how much their friendship means to her. Unfortunately, Kyle will still want to cut ties.

Back with Nick, he’ll fill Jack (Peter Bergman) in on his J.T. impersonation scheme. Jack will point out that Nick’s immunity deal may not hold up with the Feds. The Young and the Restless spoilers say Nick will settle on a strategy. He’ll plan on wiping the hacking data with help from an expert.

Talk will turn to fathers, so Jack will drop Albert Miller’s (George Kennedy) name. Nick will rage about an awful encounter between Victor (Eric Braeden) and his toxic dad. He’ll hate that Victor always seems to keep the horrible cycle going in their family.

At the athletic club, Neil (Kristoff St. John) will spot Ashley (Eileen Davidson) with another man. Since they haven’t established anything exclusive, Neil will suggest that she can date anyone she wants. Ashley will quickly clarify that this is Andrew, her new chemist.

At the coffeehouse, Abby (Melissa Ordway) will get an introduction to Lola (Sasha Calle). She’ll find out that Lola’s got a meeting planned with Rey. Arturo won’t be happy about that. He’ll feel like Rey always has ulterior motives, so he’ll want to avoid this round of family drama. Alas, it’ll be too late. Rey will walk in and get a glare from his angry brother.

Lola will want Rey and Arturo to talk, but Arturo will refuse. He’ll take off with Abby, but Lola will stick around. The siblings will embrace and share a nice moment. At Newman Enterprises, Billy will drop off something for Victoria (Amelia Heinle) and strike up a chat. She’ll turn his attention to his gambling problem. Billy won’t think it’s a big deal, especially since he’s been upfront about it.

Victoria, on the other hand, will have serious concerns. She’ll argue that Phyllis (Gina Tognoni) is terrified, but Billy will brush off his ex’s complaints. Ashley will also get some disappointing updates on Monday. She’ll realize Billy cut the Type A Consulting charges, so she’ll tell Andrew that she’ll have to give him the cash herself.

Afterward, Ashley will stop by Neil’s place to clear the air. They’ll establish that they’re good before making love. Y&R spoilers say Ashley will sigh over all the chaos she’s been dealing with. She’ll reject Neil’s offer for a weekend getaway and choose to concentrate on work instead. Back with Billy, he’ll finally get around to answering that gambling circle email. Naturally, he’ll decide he’s in.

Other Young and the Restless spoilers say Abby will meet up with Jack. She’ll wonder what’ll happen now that he knows Albert Miller may be his father. Jack will note that he might just let it go. He’ll add that Abby shouldn’t share any information with Victor.

It sounds like Y&R’s laying the groundwork for some shocking confrontations. We’ll keep you posted as other news comes in. Stay tuned to the CBS soap and don’t forget to check CDL often for the latest Young and the Restless spoilers, updates, and news.

Always expect the unexpected on #YR! Next week the mystery of Jack's father grows while relationships blossom in Genoa City. pic.twitter.com/hBi7Q1vldW