The Young and the Restless Spoilers: Sharon Terrified By Nick and Rey’s Alliance – Tells Nick The Truth About J.T.

BY hellodrdavis on September 14, 2018 | Comments: one comment
Related : Soap Opera, Spoiler, Television, The Young and the Restless 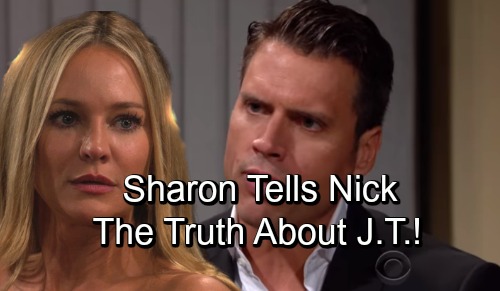 The Young and the Restless spoilers tease that Sharon (Sharon Case) will soon go into panic mode. She, like the other coverup crew members, had put the J.T. (Thad Luckinbill) matter on the back burner for a while…that is, until Rey (Jordi Vilasuso) showed up and started asking a million questions.

And then Rey revealed himself to be a police detective and arrested Nick (Joshua Morrow), and Sharon and the other coverup crew members really started to worry. They don’t want anyone poking around into J.T. for any reason, and Rey just seems a little too good at what he does.

Plus, now the coverup crew knows that the police haven’t dropped the investigation into J.T.’s disappearance. Sharon and the rest had hoped that Paul (Doug Davidson) had let up on pursuing J.T.’s whereabouts. But now they know that the investigation is going strong, and this is going to send them into a new tizzy.

And for Sharon, Rey is going to be an ongoing problem. After Nick tells Rey everything about how he impersonated J.T. and sabotaged Newman Enterprises, Rey will be impressed and will want to buy Nick a beer. Will these two become BFFs? And will they team up to find J.T.? Nick wants J.T. to be found just as much as the police do, so it’s a distinct possibility.

Rey and Nick teaming up would certainly be Sharon’s worst nightmare. She wouldn’t want Nick inadvertently relaying any details to Rey that could somehow implicate her and the coverup crew. For this reason, Sharon will debate telling Nick about what really happened to J.T.

Of course, if she does, then Nick will be torn. He’ll be upset with the coverup crew but will naturally want to protect Nikki (Melody Thomas Scott), Victoria (Amelia Heinle), Phyllis (Gina Tognoni), and Sharon. And he’d be in the position of keeping the secret from Rey.

Things would certainly get more complicated if Sharon decides to tell Nick about J.T. Do you think she will? Stay tuned to the CBS soap and don’t forget to check CDL often for the latest Young and the Restless spoilers, updates, and news.