The Young and the Restless Spoilers: Abbott Clan Crumbles After Ashley Reveals Jack Is John’s Son

BY Kinsley Goldman on October 11, 2018 | Comments: one comment
Related : Soap Opera, Spoiler, Television, The Young and the Restless 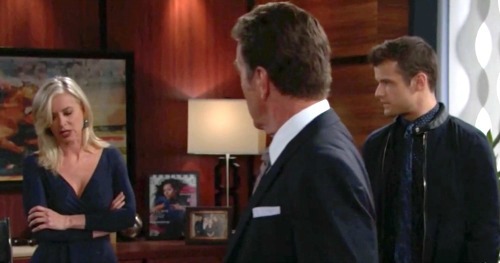 The Young and the Restless (Y&R) spoilers tease that after a major bomb drops, the Abbott clan will never be the same. Y&R fans know that Jack’s (Peter Bergman) been struggling with an identity crisis. After two DNA tests confirmed he wasn’t an Abbott, Jack went on a journey of self-discovery. Unfortunately, it didn’t bring any revelations about who his biological father might be.

That’s because Jack’s an Abbott after all. Andrew’s (Coby Ryan McLaughlin) trying to blackmail Ashley and there’s a good reason why. He runs Genoa City Memorial’s DNA lab, so probably tampered with those test results.

Once Ashley’s backed into a corner, she’ll make a startling confession. She’ll admit to playing Jack and letting him suffer for months. Naturally, that’ll bring some huge shifts for the Abbotts. Let’s consider the fallout of Ashley’s dirty move and how it’ll affect her stunned family moving forward.

First, we should consider the obvious. Eileen Davidson is leaving the show, so Ashley will have to depart Genoa City. Since Ashley’s exit is rapidly approaching, it’s tough to believe she’ll have much time to make amends. Ashley may become the pariah of the Abbott fam. Even kindhearted Traci (Beth Maitland) may turn against her, so it’s easy to imagine Ashley leaving town in shame.

Ashley may want to travel for a bit and reflect on how far she took her power pursuit. Will things still be hostile when she leaves or will conflict be replaced by Jack’s quiet bitterness? Either way, it should be painful. Davidson has said she might be open to coming back for a party or something down the road, so we’ll cling to that. There’s still hope Ashley can repair the damage one day.

Next, there’ll be big changes for Jack. Despite what Ashley’s put him through, Jack’s learned from this experience. He was stripped of his Abbott identity, so it forced him to take a closer look at himself. Jack now has a better grip on who he is as a person, but he should still be glad to know he’s John’s son. That family connection matters a great deal to fans as well, so it’s nice that Y&R’s making this right.

Of course, The Young and the Restless spoilers say Jack will be livid over Ashley’s deception. That’ll certainly affect the Abbotts, but it could also make Jack more driven. Perhaps he can reclaim the Jabot throne, which could set up more issues with Billy (Jason Thompson). The feud may really rev up if Jack goes after Phyllis (Gina Tognoni)!

Finally, there’s Kyle (Michael Mealor). He’s a shady character when it comes to business, but he’s been loyal to his dad lately. Will Jack help Kyle get ahead at the company? Since Kyle’s love life is looking up, he’d like for his career to start looking up, too.