The Young and the Restless Spoilers: Abby Deeply Disturbed as Arturo’s Past Unravels – Revelation Sets Off Rosales Family Explosion 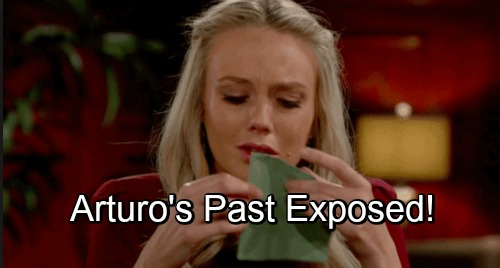 The Young and the Restless (Y&R) spoilers tease that Abby’s (Melissa Ordway) in for a shock. She’s growing increasingly curious about Arturo (Jason Canela) and his background. It’s clear that Rey (Jordi Vilasuso) and Arturo have some longstanding issues, so Abby would love to know the whole story

Tuesday’s episode offers a small glimpse of the past and sets up the bombshells to come. After Rey finds out about the watch Arturo found, he offers to take it to the police station for him. That irritates Arturo, who wonders if Rey thinks he’ll steal it.

Rey points out that it wouldn’t be the first time and recalls how Arturo took off with a neighbor’s bike when he was younger. He contends that stealing is just what Arturo does. As with any soap conversation, we have to ask ourselves what this interaction is about. What’s Y&R trying to convey?

Basically, it points to Arturo as a thief and hints that it’s part of the longtime beef for the brothers. That brings us to Rey’s estranged wife, Mia (Noemi Gonzalez). The Young and the Restless spoilers say she’ll be heading to Genoa City on November 12 – and you can bet she’ll bring a secret to blow up.

Chances are good Arturo tried to be a woman-stealer, too. He’s most likely the reason Rey and Mia’s marriage crumbled, so that may be what Abby finds out next week. The Young and the Restless spoilers say Abby will be disturbed by a startling revelation, so a betrayal shocker makes sense.

Of course, it’s not like Abby could judge Arturo for being a cheater. She’s been one herself on more than one occasion. However, Arturo’s attitude might bother Abby. After her own betrayals, Abby always found a way to be remorseful. Arturo seems to be holding a grudge instead, so maybe he feels like he should’ve gotten the girl.

Whatever the case, the Rosales family feud is far from over. The Young and the Restless spoilers say it’ll reignite during November sweeps, so Abby may get caught in the chaos. We’ll give you updates as other Y&R news comes in. Stay tuned to the CBS soap and don’t forget to check CDL often for the latest Young and the Restless spoilers, updates and news.