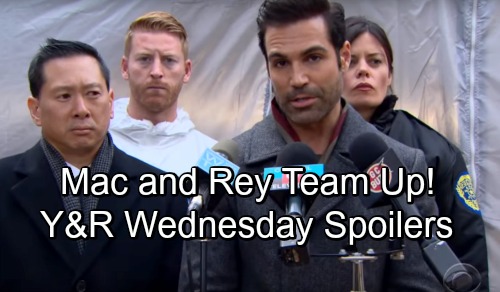 The Young and the Restless (Y&R) spoilers for Wednesday, November 7, tease that Mac (Kelly Kruger) will return to Genoa City. After being summoned by Rey (Jordi Vilasuso), J.T.’s (Thad Luckinbill) ex will fly in and make her way over to the police station. Mac certainly wants answers about J.T.’s disappearance, so she’ll be happy to answer any questions Rey throws at her.

Rey will naturally show off the watch Arturo (Jason Canela) stumbled across. He’ll get confirmation that Mac gave it to J.T. as a gift. Since J.T. was still wearing the watch, Rey may wonder if Mac’s been in touch with him. He might feel like there was still a sentimental bond between them. Rey could suspect that Mac helped J.T. leave the country and hide out somewhere.

Of course, Mac could argue that the watch was expensive and the inscription was hidden. There was no need for J.T. to stop wearing a perfectly good Rolex. That might lead to Rey’s next question of why it was found in Chancellor Park. Both Rey and Mac may be stumped on that one, but more info’s coming. Rey will test the soil and determine that this is a murder soon enough!

In the meantime, Kyle (Michael Mealor) will be his usual charming self with Lola (Sasha Calle). She’ll continue to fall for him, but he’ll make a risky offer. Kyle will wonder what Lola would think about letting him finance a restaurant for her. She’s not keen on accepting help, but Kyle might push Lola to at least think about it. He’ll assure her that he only wants to see her dreams come true.

Other Young and the Restless spoilers say Summer (Hunter King) will get fed up with Billy (Jason Thompson). He’ll manage to drive her up the wall, so she’ll be touchy in Wednesday’s new Y&R episode, November 7. These one-time sex partners will lash out at each other, so expect some insults and accusations.

Summer will face more struggles as Kyle and Lola’s romance blooms. She could find herself leaning toward sabotage in the near future, so Kyle had better watch out. We’ll give you updates as other Young and the Restless news comes in. Stay tuned to Y&R and don’t forget to check CDL often for the latest Young and the Restless spoilers, updates and news.