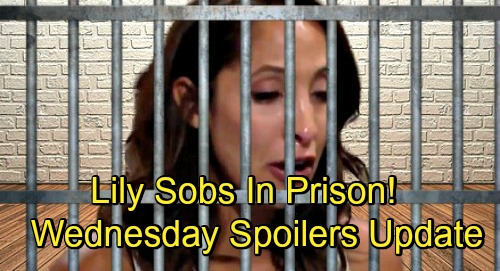 The Young and the Restless (Y&R) spoilers and recap for Wednesday, September 5, tease that Devon (Bryton James) will get some support from Mariah (Camryn Grimes). She’ll ask about Lily’s (Christel Khalil) sentencing and get the whole scoop. Devon will admit that Lily’s already behind bars. He’ll fret since he believes she shouldn’t have ended up there at all.

Mariah will give Devon a pep talk and offer to work from home for the day. She’ll give him some alone time, which he’ll appreciate. At home, Cane (Daniel Goddard) and the twins will be in a funk. They’ll try to make the best of a bad situation, but they’ll all be glum over Lily’s predicament.

Charlie (Noah Alexander Gerry) will take all this particularly hard, so Mattie (Lexie Stevenson) will make a promise to Cane. She’ll vow to look out for her brother, but Charlie will make that difficult. At Crimson Lights, Tessa (Cait Fairbanks) will have her hands full with a coffee rush. She’ll be overwhelmed, so Mariah will step up to help.

After Mariah offers advice, she’ll ultimately offer Tessa some money as well. Tessa will turn it down and keep trying to figure something out. At the Abbott mansion, Phyllis (Gina Tognoni) and Kyle (Michael Mealor) will discuss Summer (Hunter King). She’ll be returning soon, but Phyllis won’t be scared of what’s in store.

Later, Dina (Marla Adams) will get agitated and lash out at Phyllis. Fortunately, Kyle will be there to save the day. He’ll impress Phyllis by calming Dina down, but they won’t have long to enjoy the peace. The Young and the Restless spoilers say a livid Summer will show up at the door. She’ll reveal that she got Phyllis’ note, which indicated that she moved out with Billy (Jason Thompson).

Summer will explode at Phyllis and toss around a few threats. It’s clear that their war is worse then ever! Afterward, Phyllis will agree to take a walk with Dina. When she gets a phone call from Lauren (Tracey E. Bregman), Phyllis will send Dina outside to wait. Unfortunately, Dina will take off on her own! Once Phyllis disconnects, she’ll discover that Dina’s gone missing.

Back at Crimson Lights, Tessa and Mariah will face Summer (Hunter King) together. They’ll put up with the usual from “Snowflake,” but Kyle will be there as a buffer. When he gets back home, he’ll manage to find Dina in the den and put Phyllis’ mind at ease. Thanks to all Dina’s incidents, Y&R spoilers reveal that she’s got a tracker now.

As for Tessa, she’ll bump into Devon and insist that she’s sorry about Hilary (Mishael Morgan). Devon will express his gratitude before the conversation turns to money. Tessa will fish for some, but Devon will point out that he’s given her too many chances already. Later, Devon will stop by Mariah’s place and suggest that he’s concerned. He’ll wonder why Tessa’s in desperate need of cash.

In prison, Lily will struggle to adjust. She’ll look at pics of her family and realize how tough this is going to be. The Young and the Restless spoilers say Lily will curl into a ball and sob, so she’s got a difficult stint ahead of her. We’ll give you updates as other news comes in. Stay tuned to Y&R and don’t forget to check CDL often for the latest Young and the Restless spoilers, updates and news.