BY Kinsley Goldman on September 4, 2018 | Comments: one comment
Related : Soap Opera, Spoiler, Television, The Young and the Restless 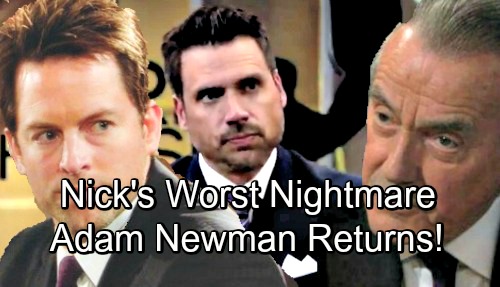 The Young and the Restless (Y&R) spoilers tease that Nick’s (Joshua Morrow) life will be turned upside down. He expects to have a pleasant wedding to Sharon (Sharon Case) and kick off their future together. Unfortunately, secrets will get in the way of that plan. Nick and Sharon are both keeping real doozies from each other!

Sharon knows Nick’s mother killed J.T. (Thad Luckinbill), so that’s quite a bombshell. She even helped Nikki (Melody Thomas Scott), Victoria (Amelia Heinle) and Phyllis (Gina Tognoni) cover it up. However, Nick’s arguably covering up something even worse. Although no one’s dead and buried thanks to him, Nick’s secret will have a far bigger impact on his relationship.

Sharon’s just trying to uphold her part in the pact and keep the people Nick cares about out of trouble. Each cover-up crew member means something to him. Nick, on other hand, betrayed Sharon with his ex. He went down the same old cheating road with Phyllis and has been lying about it for quite some time. That should be enough to tear Nick and Sharon apart, but the drama’s just getting started.

The Young and the Restless spoilers hint that the J.T. shocker will eventually explode, which could mean bad news for Sharon, Nikki, Victoria and Phyllis. They could all end up in court, so that could be rough on Nick. We also know Victor (Eric Braeden) will rev up his Dark Horse destruction efforts this fall. Y&R fans can expect this battle to spiral out of control.

Nick could lose his company to Victor and wonder what blow’s coming next. When it comes to Y&R characters, unlucky streaks can go on indefinitely! Could Adam Newman return from the dead and make Nick’s life even more miserable? The Young and the Restless spoilers reveal that an Adam recast is indeed possible. Mal Young said so himself in an interview with TV Insider.

When asked if Y&R would take the plastic surgery route again to explain Adam’s new face, Young offered a humorous response. “I try not to think about that because it would keep me awake at night,” Young said. Nevertheless, he admitted that everyone’s always buzzing about Adam. People can’t stop talking about the character, so Young doesn’t rule out a comeback.

“He seems to be a big part of the show,” Young noted. “He’s officially dead, but…maybe not?” Many Young and the Restless viewers will keep hoping for Adam’s triumphant return. It’d be great if Adam could come add to Nick’s misery.

After all, Adam would certainly want revenge over the Chelsea (Melissa Claire Egan) situation. Nick stole Adam’s wife and let Victor run her out of Genoa City! Adam might think Nick should’ve stood up to their father and took care of Chelsea – from a proper distance of course.

Since Young also promised Chelsea would be back, this would be the perfect setup for some excitement. Should Adam return for bitter revenge? Would you like to see Nick dragged into that mess? We’ll give you updates as other Y&R details emerge. Stay tuned to the CBS soap and don’t forget to check CDL often for the latest Young and the Restless spoilers, updates, and news.