The Young and the Restless Spoilers: Tessa Shocked by J.T.’s Murder – Sharon Takes Drastic Action To Save Cover-Up Crew 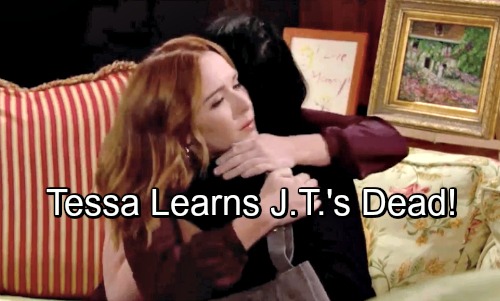 The Young and the Restless (Y&R) spoilers tease that Tessa (Cait Fairbanks) could find herself in another tricky situation. She’s repeatedly warned Mariah (Camryn Grimes) that her life is and will continue to be complicated. Trouble tends to find Tessa around every corner, so Y&R fans can expect more mayhem.

Now that Tessa’s back, she needs $20,000 to get rid of the guys who smuggled Crystal (Morgan Obenreder) into Canada. Since Tessa’s flat broke, that presents a real problem. She’s starting with nothing, so it could take a while to raise the cash. If Tessa keeps the baddies waiting too long, she could land in grave danger along with Mariah.

Nevertheless, any amount helps at this point. Tessa has to begin somewhere, so she’ll be picking up some shifts at the coffeehouse. Sharon reluctantly agrees to the idea in Tuesday’s new Y&R episode, September 4, which means Tessa will be hanging around Crimson Lights more often. Thanks to some upcoming twists, Sharon may live to regret her decision.

Mariah’s pumping the brakes right now and trying to go slow. She knows it’s wise to hold back a bit, but that plan may not last long. The Young and the Restless spoilers hint that Mariah will have some fun this fall. As she drops her guard, she’ll dive into this romance and let herself enjoy it.

Still, distrust will become a growing issue. Mariah will suspect that Tessa’s hiding something, but perhaps it’s not about the situation in Canada. Another secret could emerge due to Tessa’s job as a barista.

Let’s think about this. Crimson Lights is a hotspot for four ladies who can’t keep their big mouths shut. Who meets there to discuss J.T. (Thad Luckinbill) on a regular basis? The cover-up crew of course! Tessa could easily overhear something she shouldn’t. Sharon, Phyllis (Gina Tognoni), Nikki (Melody Thomas Scott) and Victoria (Amelia Heinle) could end up in a bind.

It’s understandable that Sharon would be looking out for Mariah, but she’s way too involved here. Y&R is probably being heavy-handed with her Tessa suspicions for a reason. Maybe it’s because Tessa will have suspicions of her own soon enough. She may uncover the truth about J.T. and face a major dilemma.

Tessa doesn’t want to keep secrets from Mariah, but she also wants to earn Sharon’s approval. She wouldn’t particularly want to damage Sharon and Mariah’s relationship either. Sharon has told plenty of lies to her daughter, so it’d hurt if Tessa exposed them.

However, the most complicated part of all this could be Sharon’s potential bribe. She might offer money in exchange for Tessa’s silence. Would Tessa be desperate enough to take it? Again, both Tessa and Mariah could be in danger without the 20 grand. That’s pocket change for someone like Nikki, who could easily tell Victor (Eric Braeden) it was for a charity project. It’d technically be true!

This sounds like a great way to put Tessa to the test. If she takes the money, she’d have solid reasons to do so. Tessa could probably come back from a mistake like this. It’d take time, but Mariah might forgive her under the circumstances.

If Tessa turns down the offer and fills Mariah in, that’d be even better. It’d be nice to see that trust between them grow and we’d still drama from Mariah’s blowup with Sharon. Bottom line, the girls’ night gang should be careful during their coffeehouse chats! Tessa could be lurking and listening, so stay tuned for what’s in store.

Do you think Tessa will learn Sharon’s secret? Will she betray Mariah’s trust by keeping quiet or come clean and further alienate Sharon? We’ll give you updates as other Young and the Restless news comes in. Stick with the CBS soap and don’t forget to check CDL often for the latest Young and the Restless spoilers, updates and news.