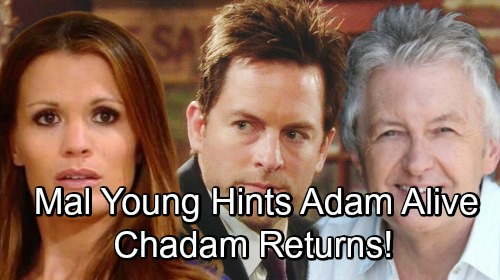 The Young and the Restless (Y&R) spoilers tease that one popular couple is consistently missed on the CBS soap. Many Y&R fans were longing for Adam’s (Justin Hartley) return long before Chelsea’s (Melissa Claire Egan) departure. Now that they’re both gone, people are really needing their “Chadam” fix!

Chelsea’s exit left viewers disheartened and worried about what the future holds. However, that exit should actually give fans hope! Although it was a bummer to see Chelsea’s growth obliterated, the fact that this con artist went on the run is a good sign. Hilary (Mishael Morgan) was killed off, but Chelsea’s still hiding out somewhere.

In an interview with TV Insider, Mal Young explained the difference between the two exits and why he opted to go that route with Chelsea. Young argued that Mishael Morgan was moving on permanently, so he wanted to make a big splash with her departure. As for Melissa Claire Egan, Young wasn’t as certain the move was permanent.

After a crucial conversation with Egan, Young felt confident that she’d be back. He decided to take her off canvas another way and leave the door open for her return. “Missy and I talked about how this isn’t the end of the story,” Young said. “Chelsea has Adam’s kid. She’s got a big chunk of Y&R history out there. That character will walk back in one day. There’s no doubt about it.”

That’s great news, but what about Adam? Could we see his comeback one day as well? Young hinted that it could happen. “Everyone talks about him a lot,” Young teased. “He seems to be a big part of the show. He’s officially dead, but…maybe not?”

It’s worth mentioning that Michael Muhney’s (ex-Adam) still got plenty of fans in his corner. He clearly wants back on The Young and the Restless. Muhney recently addressed all the messages he receives about his potential return. He used Twitter to spread the word.

Muhney revealed, “I get tens of thousands of tweets like these in my feed. All day. Every day. For years. It is beyond humbling to feel the generosity of a massive amount of people.” The Young and the Restless spoilers say the show will need more drama after the J.T. (Thad Luckinbill) storyline wraps up. Could Adam and Chelsea come back on the scene in the new year? Y&R viewers should keep hope alive!

Would you like to see Michael Muhney make a comeback as Adam? What about Melissa Claire Egan as Chelsea? Should Y&R put “Chadam” back together? We’ll give you updates as other emerges. Stay tuned to the CBS soap and don’t forget to check CDL often for the latest Young and the Restless spoilers, updates and news.