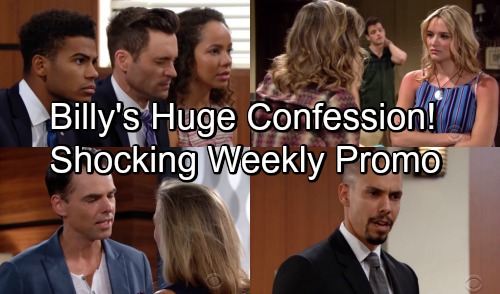 The Young and the Restless (Y&R) spoilers and shocking weekly promo for the week of September 3-7 tease that some startling developments are on the way. First, Lily’s (Christel Khalil) day in court will bring plenty of drama. Cane (Daniel Goddard) will naturally speak up for his wife, so she’ll appreciate his support. Shauna (Camryn Hamm) will decide to go easy on Lily as well. She’ll just feel like it’s the right thing to do.

Of course, Lily will also make an emotional speech about her regrets. She’ll feel terrible about letting herself get distracted on the road. Lily ran that red light and inadvertently caused two deaths. She’ll have to live with what she did to Hilary (Mishael Morgan) and the baby for the rest of her life.

Lily will just hope she can earn Devon’s (Bryton James) forgiveness one day. Unfortunately, her statement won’t do anything to change Devon’s mind. He’ll calmly tell the judge that actions deserve consequences. Devon will insist his sister needs to answer for what she’s done.

While the judge is deliberating, Cane will try to persuade Devon one last time. He’ll plead for a change of heart before it’s too late. The Young and the Restless spoilers say this sentencing will end with a shocker. Will Devon soften and ask for mercy or truly let Lily go down? Regardless, Y&R fans will be on the edge of their seats.

Meanwhile, Summer (Hunter King) will return from her cruise. It wasn’t exactly paradise out there with no way to communicate! Summer will confront scheming Phyllis (Gina Tognoni) and warn that their war isn’t over. She’ll be convinced that she’s going to have sex with Billy (Jason Thompson) eventually.

Phyllis will maintain that Billy has no interest in her daughter, but Summer will think she’s wrong about that. She’ll argue that sooner or later, Billy’s going to cave in. However, Billy will have another distraction this week. It appears he’ll fall into Kyle’s (Michael Mealor) trap and take a huge risk in a poker tournament.

Y&R buzz hints that Billy may emerge victorious, which could complicate Kyle’s plan. Nevertheless, Billy will lie to Phyllis about his behavior. He’ll attempt to rectify that later by coming clean and asking for help. Billy may swear off gambling for good, so Kyle’s probably going to need a new strategy.