BY Heather Hughes on August 31, 2018 | Comments: one comment
Related : Soap Opera, Spoiler, Television, The Young and the Restless 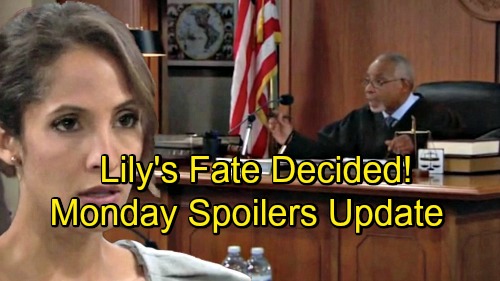 The Young and the Restless (Y&R) spoilers update for Monday, September 3, tease that Lily (Christel Khalil) and Cane (Daniel Goddard) will make love. That’d be an ordinary act any other day, but it’ll be significant on this one. Lily knows this could be the last time she feels so close to her husband – at least for the next 20 years.

Nevertheless, Cane will try to have a positive attitude. Once they join the twins, Lily will put on a brave face as well. The Young and the Restless spoilers say they’ll hope to have a normal breakfast together. Charlie (Noah Alexander Gerry) will mention reuniting with Shauna (Camryn Hamm), which Lily will be pleased about. She’ll talk about how she just wants her family to be happy.

After the others file out, Lily will take a final look around. She’ll fear that she won’t be returning to their home tonight. Meanwhile, Nate (Brooks Darnell) will have a chat with Shauna. She’ll still be feeling guilty about Hilary’s (Mishael Morgan) accident. Shauna will think she set the whole thing in motion, but Nate won’t want her to beat herself up. No one wanted Hilary and her baby to die.

Talk will turn to Lily’s hearing and what Shauna should say. She’ll note that she has a chance to make a difference in Lily’s life. Nate will encourage Shauna to go with her instincts in court. When Devon (Bryton James) arrives, he’ll assume Nate is trying to influence the teen. Nate will insist that he was just supporting Shauna in her time of need.

Y&R spoilers state that Nate will offer one more warning. He’ll wonder if Devon really wants to send Lily to prison with all the violent psychos. Nate will note that Devon could regret it if he pursues this path. In the courtroom, Michael (Christian LeBlanc) will tell Christine (Laralee Bell) that he hopes she fails. He’ll truly want Lily to be shown mercy.

Neil will be called away for an emergency, so that’ll leave the rest of the family to show up. Once court’s in session, The Young and the Restless spoilers say Christine will speak first. She’ll push for the maximum sentence, but Michael will think this situation calls for compassion. He’ll believe Lily deserves community service, probation and a steep fine.

Next, Cane will take responsibility for hiding the truth from Lily. He’ll be sorry that he kept his mouth shut about Lily running the red light. Shauna will praise Hilary as her pal and mentor, but she won’t want Lily to go down for something unintentional. She’ll argue that Charlie and Mattie (Lexie Stevenson) shouldn’t have to suffer.

Devon will take his turn soon after. He’ll understand the perspectives that came before him, but he’ll still want the maximum punishment. Devon will rant about how much Lily hated Hilary. He’ll continue to blame her for the death of his wife and child.

Lily will also have a chance to speak for herself. She’ll express remorse and talk about how she wishes she could take back her actions. Once the judge adjourns to deliberate, Charlie will lash out at Devon. Cane will approach as well and argue that Devon can still turn this around for Lily.

The judge will come back with a decision, but will Devon speak up before it’s too late? We’ll give you updates as other Y&R news comes in. Stay tuned to the CBS soap and don’t forget to check CDL often for the latest Young and the Restless spoilers, updates, and news.