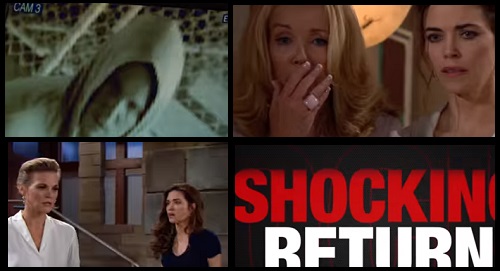 The Young and the Restless (Y&R) spoilers for the week of June 25-29 tease that we’ll see plenty of romantic moments and jaw-dropping surprises. For starters, Nick (Joshua Morrow) and Sharon (Sharon Case) will do some wedding planning. They recently got engaged, so it’s time to start thinking about all the details.

Nick will wonder if Sharon would like to have their nuptials this fall. He’ll love the idea of marrying her in the crisp autumn air. Of course, there’s always a chance they’ll move it up. Y&R weddings often end in disaster, so the show may not want to wait that long!

Whatever the case, there are more pressing matters to discuss. J.T.’s (Thad Luckinbill) credit card activity will lead to more shockers this week. For example, Victor (Eric Braeden) and Nick will actually tackle the crisis together. They’ll take a break from their feud to focus on finding J.T.

Sharon will fear that J.T. survived somehow his ordeal. Her worries should intensify after another email arrives. It’ll point to an upcoming news report on Victor’s terrible health. After the report airs, Victor will be furious. He’ll insist the situation isn’t as dire as the media implied.

Victor will hold J.T. responsible and based on Y&R’s weekly promo, it looks like he’ll fight back with a report of his own. Victor will go on camera and make a bold declaration. The video clip shows Victor shouting, “I know where you are! I will get you!”

There’ll be plenty of concerned GC residents gathered around. Victor will seem like he’s losing control and that can’t be good for his condition. Over with Ashley (Eileen Davidson), she’ll tell Victoria (Amelia Heinle) about some eyewitnesses. People are swearing they’ve seen J.T. in the flesh and security footage will back that up.

The Young and the Restless spoilers say Ash will offer a warning. She’ll contend that J.T. could appear at any moment, so Victoria should brace herself. Once Victoria updates the cover-up crew, they’ll fret about what’s next. Phyllis (Gina Tognoni), Nikki (Melody Thomas Scott), Victoria and Sharon should all battle doubts about J.T.’s death.

Will this be The Young and the Restless’ next bombshell or is there a different twist ahead? This is probably one big scam, but Victoria and the others need to be prepared for anything. Elsewhere, Abby (Melissa Ordway) and Arturo (Jason Canela) will resolve a misunderstanding. They’ll quickly kiss and make up, but more hurdles await.

Finally, Summer (Hunter King) and Kyle (Michael Mealor) will go skinny dipping. They’ll take a wild risk and grow closer in the process. We’ll keep you posted as other Y&R info emerges. Stick with the CBS soap and don’t forget to check CDL often for the latest Young and the Restless spoilers, updates, and news.