BY Heather Hughes on June 22, 2018 | Comments: one comment
Related : Soap Opera, Spoiler, Television, The Young and the Restless 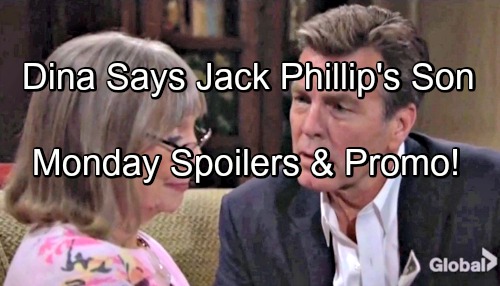 The Young and the Restless (Y&R) spoilers update for Monday, June 25, tease that Arturo (Jason Canela) will track down an angry Abby (Melissa Ordway). He’ll wonder why she took off the other night, so she’ll explain that she found a bra in his sofa. Abby will gripe about Arturo seeing another woman, but he’ll insist that isn’t the case. The bra actually belongs to his sister, Lola.

Abby won’t be sure she buys that, but Arturo will call Lola and have her admit it. Once the confusion’s cleared up, Abby and Arturo will lock lips. It looks like they’ll be able to move past this misunderstanding quickly. Meanwhile, Hilary (Mishael Morgan) and Devon (Bryton James) will come home from their getaway. When Shauna (Camryn Hamm) appears, she’ll seem a bit distraught.

Y&R spoilers say Shauna will eventually open up to Hilary. She’ll fear she spooked Charlie (Noah Alexander Gerry) by admitting she’s not a virgin. Hilary will make it clear that protection should always be used. However, she won’t think Shauna should sweat it. If Charlie thinks less of her because of that, it’s his loss.

Later, Devon will handle things on Charlie’s end. He’ll learn that Charlie’s lack of experience is the real issue. Devon will think Charlie just needs to try honesty. He’ll feel confident Charlie and Shauna can work this out.

Other Young and the Restless spoilers say Nick (Joshua Morrow) will have updates for Sharon (Sharon Case). He’ll explain the J.T. (Thad Luckinbill) credit card situation, which he learned from the investigators he hired. Sharon will pretend to be shocked, but she’s already in the loop on all this.

Afterward, Nick will stop by Newman Enterprises. He’ll talk to Victor about J.T. (Thad Luckinbill) and they’ll ultimately agree to join forces. The next phase of the search will bring some shockers. In the meantime, Sharon will believe J.T.’s still alive. Victoria (Amelia Heinle) will try to shut down the suggestion, but she’ll definitely be considering it deep down.

The Young and the Restless spoilers say another email will come through. It’ll tip the Newman clan off to a crucial newscast. Pat Harvey will report on Victor’s failing health, but he’ll deny that it’s serious. Victor has indeed had some problems and is seeing a specialist, but he won’t think it’s a big deal.

Victor will be more concerned about who leaked his medical files. He’ll contend that J.T.’s the only person it could be. Across town, Jack (Peter Bergman) will speak with Dina (Marla Adams) about Phillip Chancellor (Donnelly Rhodes). After he shows her the picture and mentions Phillip’s name, Dina will identify him as her old lover. She’ll repeatedly insist that Phillip is Jack’s father.

Jack will be thrilled to have confirmation, but there are undoubtedly some twists ahead. Perhaps Jack shouldn’t get used to the idea of being a Chancellor! We’ll keep you posted as other Y&R details emerge. Stay tuned to the CBS soap and don’t forget to check CDL often for the latest Young and the Restless spoilers, updates, and news.