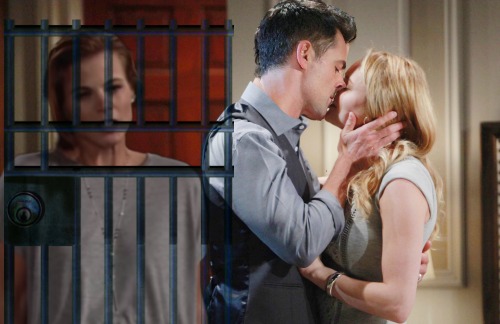 The Young and the Restless (Y&R) spoilers tease that Phyllis’ (Gina Tognoni) world could fall apart. We’ve already seen her bubble start to burst thanks to Summer (Hunter King). Phyllis seems to view Summer as a wayward child she can put back on track. It turns out Summer’s actually a dangerous vixen. Phyllis is oblivious to the threat Summer poses, but she’ll have to wise up eventually.

Of course, Summer isn’t the only problem Phyllis is facing. She’s also keeping a major secret and it has the power to destroy her life. Y&R fans will recall that Nikki (Melody Thomas Scott) killed J.T. (Thad Luckinbill). She was just trying to defend Victoria (Amelia Heinle), but Phyllis insisted the cops wouldn’t see it that way.

Phyllis has always been the ringleader of the cover-up crew. When one of the women starts to crack, Phyllis steps up to keep their secret safe. She’s had to hand out plenty of warnings to Victoria and Sharon (Sharon Case). Phyllis just wants to help everybody move on.

Unfortunately, cover-ups rarely work out on soaps. The Young and the Restless spoilers say the J.T. chaos is about to rev up. Victoria is dealing with a J.T.-related threat at Newman and it could lead to big problems.

Will this hot plot end with Victoria spilling too much? Will all the pressure spark a confession? If so, Phyllis and the others could be in just as much trouble. Victoria can’t reveal her own part in J.T.’s death without ratting out the rest of them.

Paul’s (Doug Davidson) not dumb enough to think Victoria pulled this off alone. He also knows exactly who was with her that night. Some arrests could be looming soon enough. That means Billy will find out that Phyllis has been lying to him. He’ll be hurt that she didn’t trust him with this secret.

Naturally, Summer could use that as the perfect moment to pounce. While Mom’s in jail, Summer could be busy hooking up with Billy. Is Phyllis’ worst nightmare about to kick off? We’ll give you updates as other Y&R news comes in. Stay tuned to the CBS soap and don’t forget to check CDL often for the latest Young and the Restless spoilers, updates, and news.