BY Heather Hughes on November 5, 2018 | Comments: one comment
Related : Soap Opera, Spoiler, Television, The Young and the Restless 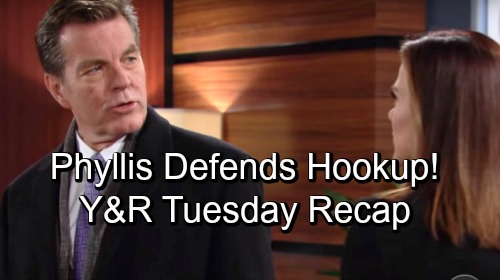 The Young and the Restless (Y&R) spoilers update and recap for Tuesday, November 6, tease that Nick (Joshua Morrow) and Phyllis (Gina Tognoni) will awaken at Dark Horse. They’ll still be naked from their night of passion, so Nick will warn Phyllis to get dressed. She won’t be concerned about what other people might think of them, but Nick will still want to protect her reputation.

On her way out, Phyllis will bump into Arturo (Jason Canela). The Young and the Restless spoilers say he’ll accidentally drop J.T.’s (Thad Luckinbill) watch, so Phyllis will pick it up for him. Meanwhile, Jack (Peter Bergman) will head in Nick’s office for a meeting. He’ll find Phyllis’ Jabot ID under a nearby blanket and put the obvious clues together.

Nick will get a lecture about sleeping with his ex, which is what destroyed his relationship in the first place. However, he’ll insist that Sharon’s (Sharon Case) done with him. Nick will argue that he can’t keep chasing her. Besides, Nick won’t think Jack needs to get involved here. What Nick and Phyllis choose to do is their business, so Jack will have to deal with it.

Meanwhile, Phyllis will bicker with Kyle (Michael Mealor) before leaving Victoria (Amelia Heinle) a message. Later, Nick will drop by to return Phyllis’ ID badge. He’ll mention Jack’s discovery and disapproval, but Phyllis won’t particularly care. She’s not the kind of gal who gets embarrassed over who she sleeps with. Nick will be on the same page, so he’ll promise to reach out again soon.

Afterward, Kyle will pop back in and offer an apology to Phyllis. He’ll realize he was a little out of line earlier, so he’ll hope to make things right. Kyle will want a shot at proving himself, so we’ll see if he gets one. When talk turns to Summer (Hunter King), Phyllis will put the blame on Billy (Jason Thompson). She’ll think the less Kyle has to do with his uncle, the better off he’ll be.

Next, Jack will find Phyllis and note that he missed her at Dark Horse. She’ll sense that he’s got a problem, but she won’t think this has anything to do with him. Phyllis will push Jack to butt out of her sex life and do his own thing.

Charlie and Mattie will try to be supportive for Lily’s sake, but they’ll be uneasy about the whole thing in private. Once Cane’s gone, the twins will talk about how nuts this is. A little later, Devon (Bryton James) will get updates. He’ll convince Cane that it’s the wrong call, so Cane will vow to stay put with Mattie and Charlie.

At the police station, Christine (Laralee Bell) will warn Rey (Jordi Vilasuso) about the J.T. investigation. She’ll point out that the clock is ticking, so he needs to come up with something fast. If not, Rey will lose his chance.

Fortunately, the watch Arturo found will come into play. He’ll mention it to Rey, who’ll offer to take it down to the station for him. Arturo will wonder if Rey thinks he’s going to steal it. That’ll lead to a conversation about stuff Arturo has stolen in the past, like a neighbor’s bike.

Once Rey notices the “Love, Mac” engraving, he’ll announce that it’s evidence. That’ll leave Arturo to complain about his controlling brother, but Abby (Melissa Ordway) will distract him with kisses. Back at the station, Rey will look at a picture of a watch-wearing J.T. with Mac (Kelly Kruger).