BY Heather Hughes on May 24, 2018 | Comments: one comment
Related : Soap Opera, Spoiler, Television, The Young and the Restless 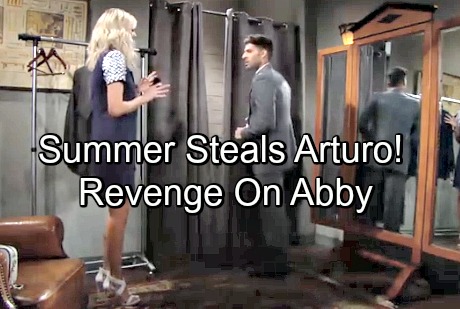 The Young and the Restless (Y&R) spoilers tease that Summer (Hunter King) will kick off her comeback starting June 4. She’s on contract, so she’ll be sticking around for a while. Naturally, that means Summer will have plenty of time to cause trouble. The blonde bombshell has been known to stir the pot and you can bet she’ll do it again in the months ahead.

For starters, Summer will create some drama for her mama! Phyllis (Gina Tognoni) will have to get Summer out of jail, so that’ll lead to some family conflict. There’s a chance Summer’s return will bring “Philly” issues, too.

The Young and the Restless spoilers say Billy and Phyllis will indeed do some arguing soon. If Phyllis has to get down in the mud for Summer’s sake, Billy may not approve. We all know he likes to be the center of Phyllis’ world anyway, so this distraction could prove problematic.

However, there’ll be other Genoa City residents at risk of Summer mayhem. Perhaps Abby’s (Melissa Ordway) the one who should really be worried. Once Summer’s back, she’s going to need a love interest. The plan may be for Summer to reunite with Kyle (Michael Mealor) eventually, but Y&R has to build to that. They might as well stick Summer with someone else first.

Abby is clearly developing strong feelings for Arturo (Jason Canela), but Summer could easily catch his eye. Nikki (Melody Thomas Scott) is the Newman Arturo would prefer, but she’s done with their fling. It seems Arturo will just have to select from the younger batch, so will he choose Abby or Summer?

No would be surprised if Summer swooped in and tried to steal Arturo’s heart. Whether she truly likes him or not, she might want to stick it to Abby. Y&R fans will recall that Abby had an affair with Summer’s husband, Austin (Matthew Atkinson), before his death. That’s the kind of betrayal you never get over, so Summer may take Arturo for revenge.

Is a good dose of karma headed Abby’s way? Will Summer and Abby’s feud reunite? We’ll give you updates as other Y&R news comes in. Stay tuned to the CBS soap and don’t forget to check CDL often for the latest Young and the Restless spoilers, updates, and news.