BY Kinsley Goldman on July 10, 2018 | Comments: one comment
Related : Soap Opera, Spoiler, Television, The Young and the Restless 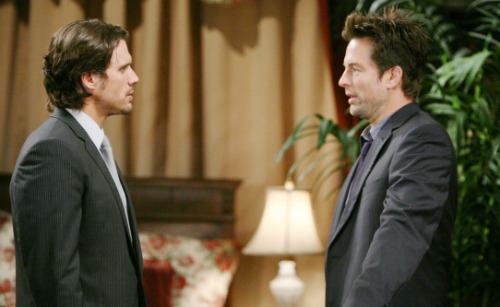 The Young and the Restless (Y&R) spoilers tease that more obstacles are ahead for Nick (Joshua Morrow) and Sharon (Sharon Case). They plan on getting married this fall, but there are several ways to derail that wedding. Sharon’s been keeping major secrets about the night J.T. (Thad Luckinbill) disappeared. She thought he was dead and buried, so that’s something Nick deserved to know.

The latest J.T. chaos probably won’t end well for Sharon and the cover-up gang. If this is the real J.T., he may rat them out and leave Nick fuming about Sharon’s lies. If this is a doppelganger, then this crew’s back where they started. They’ll still have to worry about the truth coming to light.

Of course, Nick could cause some problems of his own. The Young and the Restless spoilers say Nick’s actions will take a dark turn next week. His war with Victor (Eric Braeden) could become dangerous. Sharon may not like this more sinister side of Nick, so that could spark some issues. If Nick does something that puts Sharon or their family at risk, there’s going to be trouble.

However, the biggest obstacle could be a potential return from the dead. Adam Newman’s comeback could blow up Nick and Sharon’s relationship in a surprising way. Y&R fans know Sharon and Adam were romantically involved once upon a time. If the show has recast plans, maybe they’ll test the new actor with Sharon Case. It’d be wise to take advantage of a love triangle here.

Let’s say Adam returns and demands custody of his son. We all know The Young and the Restless will find some soapy way to clear Adam’s name. He was doing time for assaulting a prison guard before he escaped and was presumed dead in an explosion. By the magic of daytime dramas, Adam should be alive and exonerated.

Since Nick will undoubtedly have Christian (Jude and Ozzy McGuigen) back by then, he could face another custody nightmare. It’s easy to imagine Sharon stepping up and trying to get through to Adam. He may be furious over everything that happened with Chelsea (Melissa Claire Egan), but Sharon could settle Adam down and help him see the light.

That’d give Sharon and Adam a chance to grow closer. It’d also give Adam a shot at revenge! Perhaps he could set his sights on Sharon for the sake of making Nick pay. Naturally, he’d fall for her in the process. That’s just how storylines like this tend to go.

The Young and the Restless spoilers say Nick and Sharon’s engagement will indeed face some bumps in the road. Will Adam’s return be one of them? Would you like to see a “Shadam” and “Shick” love triangle? We’ll give you updates as other Y&R news comes in. Stay tuned to the CBS soap and don’t forget to check CDL often for the latest Young and the Restless spoilers, updates, and news.