The Young and the Restless Spoilers: Amelia Heinle Wants Victoria and Devon to Hook Up – Hopes for Fun Y&R Fling 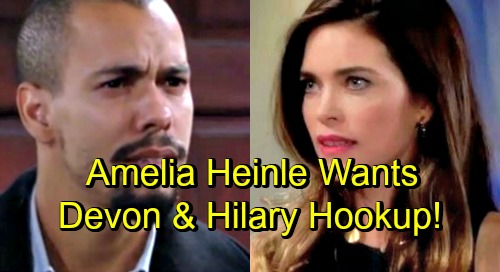 The Young and the Restless (Y&R) spoilers tease that some romantic changes are brewing in Genoa City. Y&R fans know that Victoria (Amelia Heinle) went through a brutal breakup. She endured J.T.’s (Thad Luckinbill) emotional and physical abuse before Nikki (Melody Thomas Scott) ultimately killed him – or so she thought.

Now J.T.’s seemingly back and that’s adding to Victoria’s stress. She hasn’t had time to start another romance and her heart may not be ready anyway. However, Victoria should slowly start to heal in time. The Young and the Restless spoilers say the J.T. drama will wrap up eventually, so Victoria will have a chance to rebuild her life.

Meanwhile, Devon (Bryton James) has some heartbreak in his future. Hilary (Mishael Morgan) will battle some cramps soon, so that could be the first sign of trouble. Nate (Brooks Darnell) will reassure Hilary after a quick examination, but he could be wrong. Since Mishael Morgan’s leaving Y&R, it’s pretty much guaranteed that Hilary will lose this baby. One way or another, a miscarriage should happen.

That’ll be a tough blow for Devon, but Hilary’s departure should be even tougher. Whether Hilary leaves town or dies, Devon will have to get by without her. He’ll be distraught and vulnerable, so maybe someone will step up and mend his broken heart.

Could The Young and the Restless push Victoria in Devon’s direction? Amelia Heinle would be on board with that idea. Soap Opera Digest recently asked Heinle who her character should have a fling with. Heinle knew exactly the guy she’d pick for Victoria. She exclaimed, “Devon! He’s handsome, rich and a super-nice guy.”

Of course, Y&R might want more than just a quick hookup. Do you think Hilary and Devon would make a good couple? Victoria tends to fall for all the wrong men, but Devon could break that unlucky in love streak. They may not be a forever pairing, but who cares? Sometimes soaps just need to mix it up and give fans something fun.

Devon and Victoria will both need love interests down the road, so you never know what might happen between them. Love can strike when characters least expect it. We’ll give you updates as other Y&R news comes in. Stay tuned to the CBS soap and don’t forget to check CDL often for the latest Young and the Restless spoilers, updates, and news.