BY Sean O'Brien on July 8, 2018 | Comments: one comment
Related : Soap Opera, Spoiler, Television, The Young and the Restless 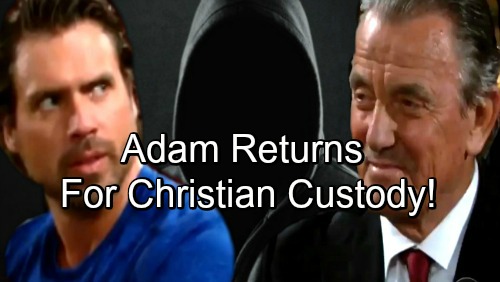 The Young and the Restless spoilers tease that Adam Newman’s (most recently played by Justin Hartley) resurrection has become increasingly likely due to the current Christian (Jude and Ozzy McGuigen) paternity storyline. What? Another tale of the return of Adam Newman!

Yes, that’s right. As long as one of, if not the greatest soap character within recent memory has a logical chance to come back this scribe will write about him. These stories obviously poke interest since they are read. How else did the reader just reach this sentence-ending question mark?

Now that emotionalists have been addressed, let’s get to the man’s comeback. Okay, so real news breaks via social media that Michael Muhney is returning to the role he made famous.

The above paragraph was purposely inserted to play even deeper into the fears detractors have. Fears? Yes, once someone marries herself, or himself to a theory, that person is then invested in it. Said detractors believe Y&R supporters and supporters of Muhney are invested in their beliefs, right?

Y&R interviewed Muhney for rehire in 2014, after having let him go in December 2013. That singular act eviscerated all know-nothing speculation about him being ineligible to be hired back due to invented stories about him. Point one taken down.

Muhney’s subsequent hire of a private detective then silenced all rational minds. For that investigator proved, conclusively, that a blogger invented the rumor involving King and Muhney. Point two was thus toppled.

Those who were wedded to one, or both theories are now holding tightly onto a last baby bottle. Muhney will never come back to the show. Well, what if (speculative) he does? Then the final point of this exposed triangle would be smashed.

That’s why those who are part of either, or both above-mentioned groups oppose Muhney’s comeback. Anyone who bought into the belief that Y&R, Muhney, and or King had done wrong will have nothing to hide behind if Muhney is rehired to play Adam again.

All questions about the revert back to Muhney’s face from Hartley’s can be written away, as has been done by soaps throughout the ages. That issue isn’t really relevant, though surely must be addressed in a creative fashion.

The most important part of this comeback story is how it would be done. Well, Christian’s custody may be the vehicle. Combine current developments with Muhney’s social media comments to fans about patience and we just might (once more, speculative) have one of the most epic returns in all of daytime history brewing.

Who roots for an iconic soap opera and a great actor? Honest people who appreciate their own lives and wish others well. That’s actually the main reveal learned from this real life and linked on-screen story. CDL is a leading source for everything linked to The Young and the Restless. Check back regularly for Y&R spoilers and news!