The Young and the Restless Spoilers: Arturo is Abby’s Man – Why Is Y&R Making Nikki Look Foolish Again? 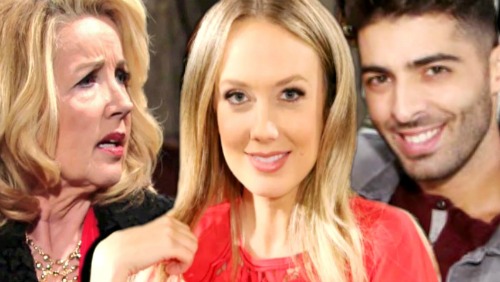 The Young and the Restless spoilers tease that Nikki (Melody Thomas Scott) is making herself look foolish, yet again. Arturo (Jason Canela) was a rather absurd dalliance and Victor (Eric Braeden) is her great love. Abby (Melissa Ordway) is Mr Rosales’ girlfriend now. Scripts must be written that has Nikki accepting that, rather than acting like a jilted, jealous, needy school girl.

To say that Nikki and Arturo were girlfriend and boyfriend would be wrong. No, they were a repetitive hookup during a time when Niktor decided to have an open relationship. Translation, Nikki and Victor willingly broke their marriage vows because of their on-again, off-again relationship, if one wants to call it that.

Thankfully, Y&R has Nikki and Victor admit that Niktor works best. The elder power couple of this show is best when they are working together. Let’s keep them like that indefinitely, okay Mal Young?

Abby didn’t know that Arturo had been with Nikki. But Miss Newman learned that her stepmother, who is more than twice Arturo’s age, had connected with the man romantically before Abturo became a thing.

Y&R, like many soaps, purposely paired Nikki with Arturo in order to push the soapy envelope. Was it believable that an older woman and a younger man could hook up? Sure, such is life in the real world as various viewers and readers understand and have experienced themselves.

However, having Nikki use her body to sway the New Hope business deal with Arturo’s construction company felt tacky. The Nikki character devolved below her stripper origins. Was that necessary? No.

Seeing Nikki be written into this week’s Genoa City Athletic Club rooftop scene was rather ridiculous. She hadn’t been in that day’s story and just happened to enter when Arturo was dancing with Ashley (Eileen Davidson). Yes, unbelievable.

For whatever reason, Y&R continues to push Nikki’s interest in Arturo. Sorry, but that doesn’t project well. And yes, anyone, be that person a female, or a male, can write a reaction to how Nikki is being written. It would be sexist to think, or state, otherwise.

Arturo and Abby have begun a relationship that’s based upon friendship, not lust. They make each other happy, rather than serving as a distraction from life. Their link has positive appeal and isn’t dysfunctional, like Narturo was. All the best to Abturo, as that pairing is good. CDL is a leading source for everything linked to The Young and the Restless. Check back regularly for Y&R spoilers and news!