The Young and the Restless Spoilers: Y&R’s New Paternity Mystery – Summer Pregnant After Billy and Kyle Hookups, Who’s the Daddy? 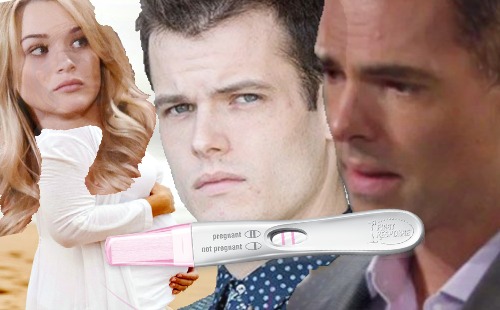 The Young and the Restless (Y&R) spoilers tease that Summer (Hunter King) could stir up more trouble than she anticipates. Y&R is setting up a story of steamy temptation. Billy (Jason Thompson) has tried to be firm with Summer, but she just won’t listen. It’s clear that Summer’s going to keep flirting and doing whatever she can to get close to him.

Of course, we all know Billy’s pretty weak when it comes to women. If he’d sleep with his brother’s wife, he could easily sleep with his girlfriend’s daughter! Phyllis (Gina Tognoni) cheated on Jack (Peter Bergman) with Billy and what goes around usually comes around on a soap. She may ultimately face a betrayal as well. The consequences could be worse than Summer and Billy ever imagined!

Y&R keeps highlighting the fact that Summer is just like her mom used to be. Phyllis sees her younger, wild self in Summer and desperately wants her to snap out of it. She made serious mistakes and caused major drama in the process. Phyllis simply wants to spare Summer the pain and regrets later on.

However, it looks like Summer will have to learn her lesson the hard way. Perhaps she’ll even face a familiar dilemma. The Young and the Restless fans will recall that Nick (Joshua Morrow) had an affair with Phyllis years ago, which resulted in a paternity mystery. Phyllis wasn’t sure if the baby belonged to Nick or Jack. After plenty of twists and turns, Nick turned out to be Summer’s father.

We should also mention that Summer and Kyle (Michael Mealor) are on the verge of bonding again. Now that they’re teaming up on a Jabot project, they’ll ultimately put their past issues to rest. Kyle is obviously hung up on Summer. There also seems to be some longing on her end, so they could hook up soon.

Will Summer sleep with Billy and Kyle around the same time? Will she get pregnant and repeat her mom’s history? The Young and the Restless spoilers say Mishael Morgan (Hilary) is leaving the CBS soap, so Hilary will inevitably lose her baby. Y&R may want another pregnancy to fill that void and set the stage for kid chaos.

It’d serve Summer right if she gets herself knocked up and doesn’t know who the father is. Could “Philly” survive the blow? We’ll give you updates as other Y&R news comes in. Stay tuned to the CBS soap and don’t forget to check CDL often for the latest Young and the Restless spoilers, updates, and news.