The Young and the Restless Spoilers: Nick’s and Summer’s Parent Problems – Nick’s Are Real, Summer Behaves Like A Teenage Brat 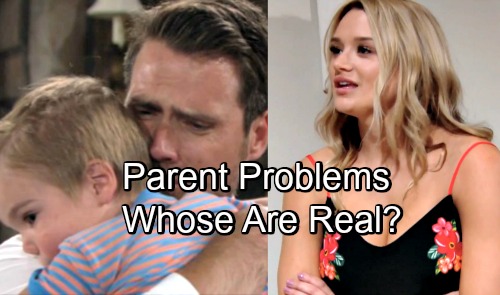 The Young and the Restless spoilers tease that Nick (Joshua Morrow) actually has a problem with his father, Victor (Eric Braeden). Meanwhile, Summer (Hunter King) merely believes in her mind that her mother, Phyllis (Gina Tognoni), is causing her trouble.

Victor has been, is, and will likely remain a manipulative monster. The childhood grudge that he still holds for his long-deceased father, Albert (played by the late, great George Kennedy), has often been transferred to his children. While Adam (Justin Hartley) seemingly suffered the worst fate possible, via an explosive death through Chloe’s (Elizabeth Hendrickson) hands that Victor enabled, Nick has surely taken the heavy brunt of the Moustache’s vile actions through the years, including this one.

The deeply complex sentence that ended the last paragraph had to be written in order to spit out what that cowardly lout Victor Newman has done to his first-born son. Only the most amoral goof would even conceive of taking Christian (Jude and Ozzy McGuigen) away from Nick, instead of simply suing for visitation rights.

Because he’s a liar, Victor just proved that he’s not interested in Christian’s welfare, or even maintaining access to Adam’s second-born son. Instead, he openly retaliated against Nick for calling him out, regarding the agenda-driven Newman Enterprises Chief Operating Officer job offer, and then by seeking full custody.

Nick was right to reject the COO slot, as he would have been setting himself up for misery, while also alienating Victoria (Amelia Heinle). His instincts were apt in wanting to move to San Diego, California. Doing so would have neutralized the grip Victor had over Nick and his family.

But, as Y&R viewers know, the Black Knight has forced Nick to remain in Genoa City by gaining temporary custody of Christian. However, Nick’s vow to make Victor pay by taking family from him in the near future feels like it will come true.

Meanwhile, off in la la land, Summer is behaving like a teenage brat. And no, that wasn’t a reference to Thad Luckinbill’s (J.T.) role in the almost-Oscar-winning picture. If it was, that fun film’s title would have been capitalized like this, La La Land.

Phyllis has done nothing to earn Summer’s seduction betrayal that’s currently being attempted with the resisting Billy (Jason Thompson). Hopefully, Thompson’s character reveals Summer’s plan before she damages, or even ends Philly.

So, just to recap, Nick actually has a parent problem. Summer, his daughter, does not. Possibly, if Summer learns how her grandfather is treating Nick, she’ll wake up and stop trying to thwart her mother, who does not deserve to be targeted. CDL is a leading source for everything linked to The Young and the Restless. Check back regularly for Y&R spoilers and news!