The Young and the Restless Spoilers: Billy Walks Out on Phyllis – Philly Split Over Summer

BY hellodrdavis on June 18, 2018 | Comments: one comment
Related : Soap Opera, Spoiler, Television, The Young and the Restless 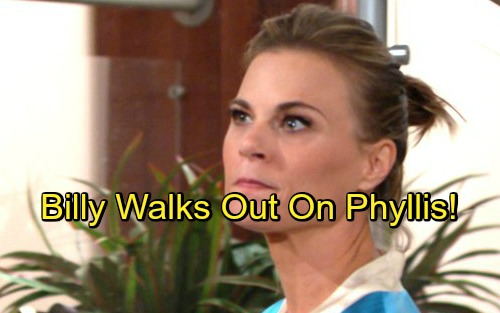 The Young and the Restless spoilers tease that Phyllis (Gia Tognoni) may be in for a surprise very soon. She and Billy (Jason Thompson) have been dealing with Summer (Hunter King), who recently returned home to Genoa City. Summer’s hell-bent on causing trouble in Philly’s relationship, and she’s doing a great job so far.

A large part of the problem that Philly are having with Summer involves their living arrangements. They’re all three living in Summer’s apartment, and it’s just a little too close for comfort, especially where Billy is concerned. Summer has been prancing around in slinky lingerie, making suggestive comments, and basically making Billy feel very uncomfortable.

But Summer just might take things too far. B&B spoilers say that Summer will set up a poker game in the apartment while Phyllis is away. And Billy – a recovering gambler – won’t be able to resist the temptation to play. Summer, of course, will know exactly what she is doing, and she and Billy will keep his involvement in the game a secret from Phyllis.

This will put Billy in an impossible situation. He won’t like the idea of keeping something secret from Phyllis, but he won’t want to tell her about his poker playing, either. Of course, this means that Summer will have something to hold over his head. She could threaten to tell Phyllis about Billy’s poker playing if Billy doesn’t do exactly what she wants.

But it doesn’t look like that situation is going to sit well with Billy, and he may get fed up with all this nonsense. B&B spoilers say that Billy will make a daring move. Perhaps he’ll decide to move out of the apartment. Billy has discussed the possibility of moving out with Phyllis, but she has resisted the idea.

Billy has thus far respected Phyllis’ wishes on the subject of moving, but the more Summer pressures him, the more determined he may become to get the heck out of there. He may tell Phyllis that he’s moving out with or without her. Now that would be a bold move!

Will Billy get out of his current living situation? And if so, will Phyllis follow him, or stay in the apartment with Summer? Stick with the CBS soap and don’t forget to check CDL often for the latest Young and the Restless spoilers, updates, and news.