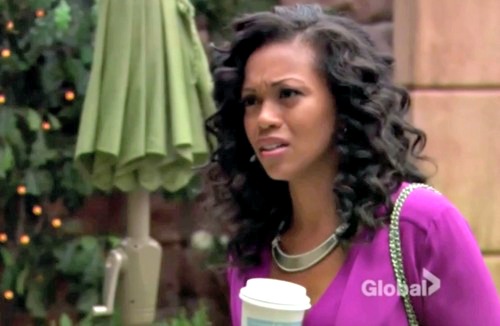 The Young and the Restless (Y&R) spoilers tease that one couple will experience total devastation. Hilary (Mishael Morgan) and Devon (Bryton James) are finally back together, so they’re really on cloud nine at the moment. They’ve got a baby on the way and are all set to build a family. Life just couldn’t get much better, but Y&R is just setting them up for a huge fall.

You’ve probably heard by now that Hilary’s out at the CBS soap. Mishael Morgan decided to exit the role, so we’d better brace for trouble. It’s reasonable to assume Hilary will have a miscarriage. Sometimes soaps will choose a deceptive route and have the mother lie about losing her little one, but it’s hard to imagine that working here.

Hilary loves Devon and wants to raise their child as united parents. There’s no reason for her to fib about a miscarriage and bolt, so a real one seems likely. The Young and the Restless buzz hints that Hilary will get into a terrible car accident. TV Source’s insiders claimed Morgan’s exit was happening, which turned out to be true. They also hinted at a looming crash, so that may be true as well.

Of course, there two ways Y&R could take this scenario. Option one is that both Hilary and her baby die. That would be brutal for fans, but the double blow would bring plenty of drama. It’d be as bad as it could possibly get for Devon. The somewhat less traumatic option would still be pretty awful. Hilary may simply sustain injuries that cause a miscarriage.

In that case, the loss could tear Devon and Hilary apart. He would undoubtedly try to support her, but she might want to put some distance between them. Hilary might take a job in another state or even another country. She might decide it’s just too painful to be around Devon after the loss she’s experienced.