The Young and the Restless Spoilers: Ashley and Kerry’s War Heats Up – My Beauty vs. Jabot Bitter Battle Brings Crushing Blows

BY Heather Hughes on November 26, 2018 | Comments: one comment
Related : Soap Opera, Spoiler, Television, The Young and the Restless 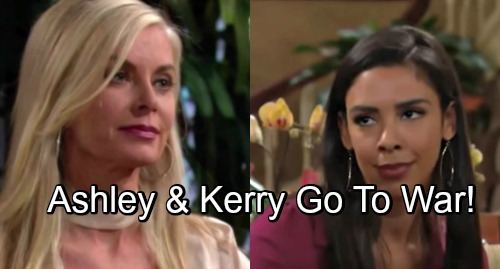 The Young and the Restless (Y&R) spoilers tease that another war’s brewing. Y&R fans know that Ashley (Eileen Davidson) left for Paris to start her own cosmetics company. She took all her patents and left Jabot in a real bind. It’s tough to blame her after the way Ashley was treated, but she was pretty rough on Jack (Peter Bergman), too. Ashley’s paternity deception really brought a huge mess!

However, that mess is over and now Jabot’s dealing with another one. They’ve been forced to replace many of their most popular lines and products. Thankfully, Phyllis (Gina Tognoni) was able to score Kerry (Alice Hunter) for their team. Y&R spoilers say she’ll be crucial in the coming months. This is a make-or-break-it moment for the company, so Kerry will have to step up her game even more.

Ashley revealed that My Beauty has a new line set to be released in the spring. That doesn’t give Jabot much time to get theirs ready. Kyle (Michael Mealor) feared disaster, but Kerry was as cool as a cucumber. She’ll remain confident that she can put together some solid offerings to compete.

Of course, The Young and the Restless spoilers say there’ll be some snags along the way. Some of those snags could come from Jabot’s own staff! Billy (Jason Thompson) and Kyle will work to get Phyllis off the throne, which probably isn’t the best plan. They need to be coming together right now, not strategizing against their CEO. Rocking the leadership boat could just make this company crisis worse.

Nevertheless, Kerry will stick to her game plan. No matter what happens at the helm, she’ll do her job and she’ll do it well. Based on Kerry’s skill set and self-assurance, we have every reason to believe she’ll do what she promised. Jabot should have a line that’s worth spending money on by the time spring rolls around.

That means we’ll see a battle between Ashley and the family she left behind. Will My Beauty crush the competition or will Jabot hold their own? Could Y&R convince Eileen Davidson to make a short return for this? It sounds like it’d be a fun idea!