The Young and the Restless Spoilers: Nick’s With Phyllis, But Sharon’s His True Love – Shick Reunion On The Way

BY Sean O'Brien on November 25, 2018 | Comments: one comment
Related : Uncategorized 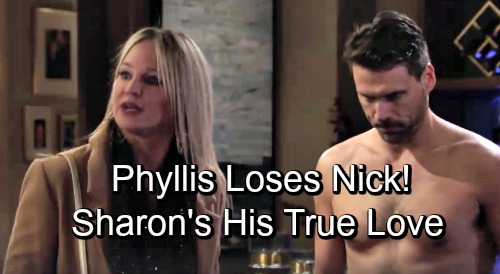 So, viewers were led to believe that Shick was reforming, that an actual remarriage was going to take place. And then, leading into their fall wedding plans, Phyllis and Nick happened at Summer’s (Hunter King) visually pleasant condo. Why?!

The hardest of hardcore daytime fans, meaning those who are daily devotees and know as much about the show as they do all other topics, instantly recognized that Y&R had opened the daytime door to Phick the sequel, starring Tognoni as the modern insert for the great character Michelle Stafford initially portrayed. Those are hard stiletto’s to fill, but Tognoni’s consistent delivery gives her portrayal game.

Here’s the thing though, Nick continued insisting that he wasn’t giving up on the goal of reuniting Shick. Sure, he knee-jerked, with jerk being the character trait that he and Phyllis share, back into the arms of the woman in the world Sharon understandably despises more than any other.

The idea that Nick would wrong Sharon with the once and now again Red is still breath-taking, even though it was telegraphed by the Phick cheaters. But even though Sharon is clearly being thrown into Rey’s (Jordi Vilasuso) arms, possibly supplanting Mia (Noemi Gonzalez) by Christmas time, hope for Shick isn’t truly dashed.

Sharon and Nick were written apart in 2005, when Y&R decided to gamble. TPTB at the time wanted to push Case and Morrow in different directions. It will forever remain debatable if that double creative choice proved worthwhile. There’s also no way to know if both characters would have been better off staying together, or not splitting due to Cassie’s (Camryn Grimes) tragic demise, within the past decade-plus.

To think that Shick was teased four years ago and was painstakingly offered up this fall, with another nuptial being blocked, was too much for some Shick fans to digest. However, Shick’s prevention means a reunion remains viable at any future plot point. Phick broke apart before and could do so again. Shey hasn’t even formed and wouldn’t have a history if it does.

The bottom (story)line is that Nick loves Sharon and she loves him. Just as they tried to give it a go two times in the past four years, so too could many sets of circumstances lead them back to an actual remarriage. Optimistic romantics, which includes many soap fans won’t give up. That along with Nick and Sharon’s feelings for each other gives Shick a shot, now and forever.