The Young and the Restless Spoilers: Dark Nick’s Rotten Streak Gets Worse – Is the New Nick Hot or Sleazy? 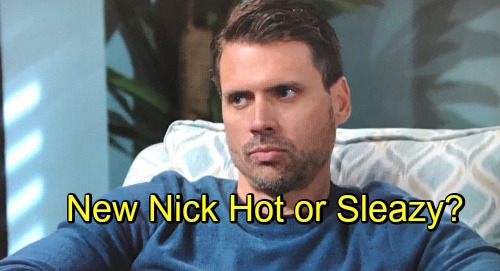 The Young and the Restless (Y&R) spoilers tease that Nick (Joshua Morrow) will do his best to stay committed. It’s clear that he’s stuck on Sharon (Sharon Case), but he’s trying to move on with Phyllis (Gina Tognoni) anyway. Y&R watchers can expect Phyllis to battle more and more doubts soon. She’ll sense that Nick isn’t as all in as he claims to be.

Of course, stringing Phyllis along is just the latest in a series of terrible decisions. Nick has trashed his life all while acting like it’s new-and-improved. The Young and the Restless has certainly showed off a different side of Nick over the past few months.

Y&R viewers have been buzzing about the character overhaul, so we want you to weigh in. How do you feel about the new Nick? Is he smooth and sexy or sleazy and selfish? Some fans out there might appreciate Nick’s confidence. He’s become the kind of guy who takes charge, which can be a good thing.

Nick’s attitude change started after Victor (Eric Braeden) went after custody of Christian (Jude and Ozzy McGuigen). It’s at least nice that Nick doesn’t let Victor push him around anymore. However, Nick might be going a bit overboard. His smug nature can be rather off-putting, especially now that he’s paired up with Phyllis (Gina Tognoni).

Nick and Phyllis claim to be a power couple, but they’re more like a detestable duo. It seems like they can do no wrong in their own eyes. If Nick really cared about Sharon, he wouldn’t have moved on so quickly. He slept with Phyllis almost immediately after Sharon convinced him she was truly done.

Now Nick has already moved Phyllis in the brand-new house he bought. It’s worth mentioning that Nick purchased that house against Sharon’s wishes and without her knowledge. She told him repeatedly that she wanted to stay at the cottage, which seems fair considering all the memories of Cassie (Camryn Grimes) she made there.

Nick’s betrayal with Phyllis was obviously the worst blow. He didn’t bother to check with Sharon about that engagement ring she took off. Nick just sulked away to cheat with the woman who would hurt Sharon the most. Now he’s shacking up with Phyllis and adding to Sharon’s pain. The Young and the Restless spoilers hint that more painful blows are still to come.

Nick used to be the kind of guy who would always put others first, but he’s become awfully self-centered lately. Is Nick basically a villain at this point? How do you feel about dark Nick and his horrible choices? We’ll give you updates as other Y&R news emerges. Stay tuned to the CBS soap and don’t forget to check CDL often for the latest Young and the Restless spoilers, updates and news.