The Young and the Restless Spoilers: Ashley Faces a Romantic Curveball – Neil Makes His Move, Sets the Mood for Love 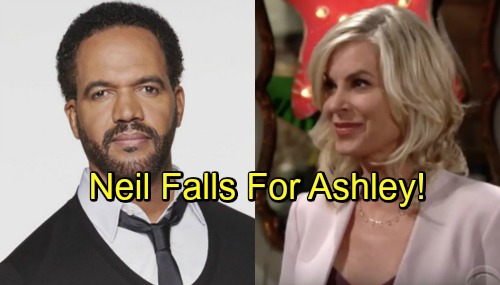 The Young and the Restless (Y&R) spoilers tease that Ashley (Eileen Davidson) will face some big surprises. She’ll have to weigh her options and make some unexpected decisions about what’s next. After Ashley walks into a shocking situation, she’ll mull over what she really wants her future to look like.

Deals have been falling through all over the place and that can’t be good news for Newman Enterprises. They need to calm everyone’s fears and keep this empire going strong. As more agreements get wrecked and additional clients walk, Neil will grow increasingly concerned. He’ll need to stop the bleeding – and fast!

The Young and the Restless spoilers say one lost deal will leave Neil especially worried. Perhaps it’ll be a very profitable one for Newman. Neil may feel like it’s crucial to get the other company back on board. He won’t know what to do, but Ashley will eventually come through for him. She’ll offer critical information that helps Neil turn this around.

Neil will use that info to repair the damage with this other company. The deal will be salvaged, so Neil will be incredibly grateful. He’ll decide he’d like to show his deep appreciation, so he’ll ask Ashley to come over and celebrate. Since Ash won’t be too busy, she’ll agree to have dinner at the penthouse.

Ashley won’t think this invitation is anything more than a grateful gesture. She’ll expect a fun meal with a friend, but a major curveball’s headed her way. The Young and the Restless spoilers say Ashley will find a romantic setup when she arrives. Neil will set the mood with flowers and candles, so it’s clear he’ll have a different take on the evening.

How will Ashley respond to Neil’s plans for romance? Will she be open to the idea? Y&R viewers will be anxious to see if Neil and Ashley heat things up soon! We’ll give you updates as other details emerge. Stay tuned to the CBS soap and don’t forget to check CDL often for the latest Young and the Restless spoilers, updates, and news.