The Young and the Restless Spoilers: Ashley Knew It Was Time To Leave Genoa City – Eileen Davidson’s Y&R Legacy Preserved 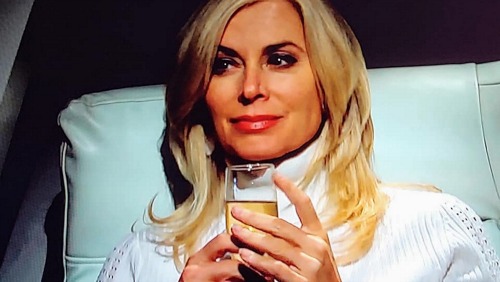 The Young and the Restless spoilers tease that Ashley (Eileen Davidson), feeling fully vindicated with all that’s transpired recently, leaves Genoa City with her head held high. The impact that makes on the Abbott’s and Jabot will be felt for years on end.

Detailing daytime’s daily dealings. Four consecutive words, that all started with a d at the start of the last sentence, were not meant as a joke. Neither is the following; Davidson has always been a great member of Y&R’s cast.

Her multiple stints, dating back to 1984, demonstrate that the consistent delivery of solid performances earns respect. To have done so across more than fifteen-hundred episodes is all the more impressive.

Davidson won’t be replaced, regardless of whether her character is recast, as was done twice before. Soap opera fans naturally become attached to the characters and the actors who portray them. The emotionality of the stories and the time investment dovetail to develop equal interest in the fictional tales Ashley pursued and the career efforts that Davidson offered.

As for Ashley, it appeared as though she was going to leave disgraced. The paternity trick played on Jack (Peter Bergman) was something Victor (Eric Braeden) was capable of pulling. But Jackie tried and failed to hide a family company-altering fact that gives Ashley ownership of all the products she’s ever created for Jabot, which covers nearly everything.

Ugly images of Ashley shoving the shredded, then restored legal document under Jack’s nose were beautifully mixed with flashback Abbott family history scenes, circa 1971. Combined, Y&R has truly crafted a deserved, fitting tribute to one of its all-time great actors who may be departing forever.

Many years ago it would be been naive to suggest that Eileen Davidson would be leaving for good. Inclinations to return to her other great role, as Kristen DiMera on Days of Our Lives, or to take some time off, would have been natural. But this go-round feels different.

The DOOL role was recently recast with Y&R alum Stacy Haiduk, so Davidson isn’t switching soaps this time. She also has recently implied that a return to daytime’s reigning leader isn’t in the offing, though surely an occasional pop-in could always happen.

Y&R is renewed through 2020. Today’s television world makes the future uncertain beyond that point and thus Davidson’s last regular gig could have already played out. If that is so, then all the best is offered to one of the genre’s greatest modern actors.