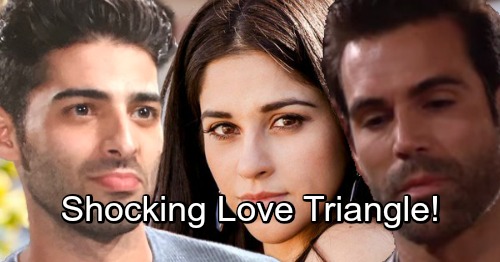 The Young and the Restless (Y&R) spoilers tease that Rosales family drama will take center stage down the road. We’ve been hearing a lot about Rey’s (Jordi Vilasuso) estranged wife, but Y&R hasn’t revealed much about her just yet. However, all that’ll change once Mia (Noemi Gonzalez) makes her way into town. Some secrets are just waiting to be unleashed and the result won’t be pretty!

Let’s consider what we know about the Rosales fam so far. Lola (Sasha Calle) has some issues with Rey, but that seems to stem from his overprotective nature. She’s been far more willing to bond than Arturo (Jason Canela). Although Arturo’s slowly coming around, it’s clear that something happened with Rey. Some major event must’ve sparked the war they’ve been trying to recover from.

What could’ve caused so much conflict between Rey and Arturo? There are plenty of ways Y&R could take this storyline. Still, we can think of one answer that’d be a particularly good option. It’s common for brothers to fight over women on soaps, so Mia may have started this mess.

As a potential piece of proof, consider the actress they cast in the role. According to her Wikipedia page, Gonzalez is 26. Canela also happens to be 26, but Vilasuso is over a decade older. Did he swoop in and steal his brother’s girl? There’s always a chance Gonzalez will play a character who’s a different age, but she definitely looks young. It’s an odd casting choice for that reason, so it’s worth pondering.

This could also explain why Arturo became interested in older women like Nikki (Melody Thomas Scott). Maybe he sought out more mature ladies who would view him as a real prize. It could’ve been an attempt to heal his broken heart after Mia betrayed him with Rey.

Of course, there could be another layer to this story. Rey and Mia are now estranged, so something must’ve happened between them, too. It’s possible Arturo retaliated by making a move on Rey’s new wife. Maybe Mia and Arturo just couldn’t stay away from each other. As evidenced by Arturo’s involvement with Nikki, he doesn’t have a problem with affairs.

The Young and the Restless spoilers say Abby (Melissa Reeves) will make a disturbing discovery soon. She’ll find out something shocking about Arturo’s past, so that may involve Mia and some cheating news. Once the truth’s out in the open, Y&R fans can expect loads of chaos. You can catch Mia starting November 12, so stay tuned.

Has girl trouble been driving Rey and Arturo’s battle? We’ll give you updates as other Y&R details emerge. Stick with the CBS soap and don’t forget to check CDL often for the latest Young and the Restless spoilers, updates and news.