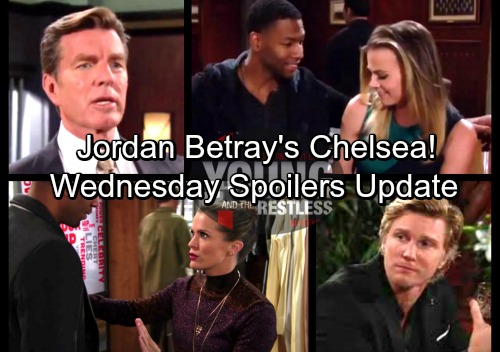 The Young and the Restless (Y&R) spoilers update for Wednesday, February 7, tease that Victoria (Amelia Heinle) and Ashley (Eileen Davidson) will bicker again. This time Lily (Christel Khalil) will get caught in the conflict. She’ll turn to Nikki (Melody Thomas Scott) for a little help later. Lily will hope Nikki can talk to Victor (Eric Braeden) and somehow settle the conflict.

Once Nikki mentions the problem, Victor will point out that he’s in already in the know. He’ll think the Ashley’s fire will help Victoria out in the end. At the Abbott mansion, Ashley will receive a sincere apology from Jack (Peter Bergman). He’ll urge Ash to come back to Jabot.

Jack will add that he’s going to change the blood-relative amendment. He’ll just want everything to go back to normal. Ashley will get emotional and note that she can forgive, but she can’t forget. Ashley will remind Jack that their trust was shattered. It can’t be repaired in one day.

Meanwhile, Jordan (Darnell Kirkwood) will return for a Fenmore’s meeting, but it’ll all be a ruse. Phyllis (Gina Tognoni) will dupe Jordan and push for answers about Chelsea (Melissa Claire Egan). When Jordan refuses to cooperate, Hilary (Mishael Morgan) will approach their table as backup.

Hilary will threaten to call the cops unless Jordan spills the details. He’ll confess that Chelsea ran similar schemes in the past. Chelsea used to steal social security numbers for her scams. However, Jordan will think Chelsea’s on the right path now. He’ll argue that she’s not into that stuff anymore.

Later, Chelsea will get a call from Jordan. She’ll head to the coffeehouse for updates on the situation. When Nick (Joshua Morrow) walks in, Chelsea will be ranting about Phyllis’ attempt to score dirt. Nick will undoubtedly battle more suspicions as a result.

At home, J.T. (Thad Luckinbell) will prepare for a dinner party. He’ll invite a few guests, but trouble will hit later. Phyllis, Billy (Jason Thompson), Chelsea and Nick will all attend this gathering. The Young and the Restless spoilers say it won’t take long for a fight to break out. Naturally, Chelsea and Phyllis will be the ones at odds.

After the chaos winds down, J.T. will give Victoria some good news. He’ll reveal that he’s decided to accept the Newman job offer. Back with Jordan, he’ll run into Lily and they’ll spar briefly. When Lily admits she reunited with Cane (Daniel Goddard), Y&R spoilers say Jordan will disapprove.

Hilary will butt in and defend Lily’s decision. Relentless Jordan will push Hilary to have a drink with him, but she’ll decline. Hilary will point out that she may already be pregnant since she’s using a sperm donor. Jordan will laugh about donating his sperm in the past and being listed as a brain surgeon.

At the penthouse, Chelsea will get some encouragement from Nick. He’ll agree that Phyllis has gone too far. Suddenly, The Young and the Restless spoilers say a text will come in. Chelsea will look worried as she gazes at her phone. The message will state that Chelsea isn’t going to get away with this.

It looks like the excitement’s revving up in Genoa City. We’ll keep you posted as other Y&R details emerge. Stay tuned to the CBS soap and don’t forget to check CDL often for the latest Young and the Restless spoilers, updates and news.