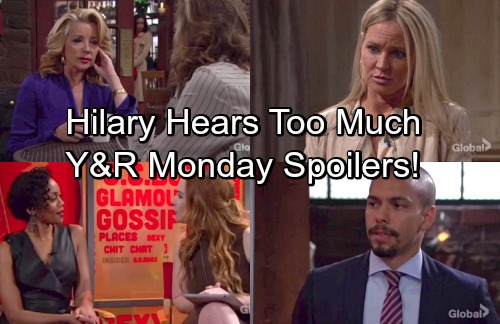 The Young and the Restless (Y&R) spoilers for Monday, April 30, tease that Nick (Joshua Morrow) and Sharon (Sharon Case) will get some disturbing news. What kind of updates will they receive and who will be the one to deliver them? There’s a good chance all of this ties in with J.T. (Thad Luckinbell) somehow.

It’s possible someone will notice something suspicious in the Chancellor Park garden. Paul (Doug Davidson) might call for a thorough investigation of the area. If he believes a body’s buried there, Paul may give orders to dig up the site. The cops still think J.T.’s on the run, so they could be in for a shock when his corpse is excavated.

The news of digging would certainly rattle Sharon. She’s already on edge over the big secret. Nick would also be unsettled by criminal activity in that garden. It’s supposed to be a safe place for families, so Nick could relay his concerns to Sharon and rev up her guilt.

Of course, there are other possibilities to consider. Sharon and Nick might hear about some crazy strategy of Victor’s. The Young and the Restless spoilers say Sharon will indeed end up at Victor’s house soon. He’ll promise that he’s going to do whatever it takes to find J.T., so Sharon’s fears will intensify.

Meanwhile, Hilary (Mishael Morgan) will battle some fears as well. After finding out about her chemical pregnancy on Friday, Hilary will face a tough task on Monday. Y&R fans can expect Hilary to do something drastic. She’ll hope she can keep Devon out of the loop and come up with a new plan ASAP.

Hilary will also eavesdrop on Phyllis (Gina Tognoni) and Nikki’s (Melody Thomas Scott) chat early next week. She’ll realize a crime’s been committed, so she’ll probably confront Phyllis before long. Hilary and Phyllis are scheming besties, so they may choose to come clean to each other in the near future.