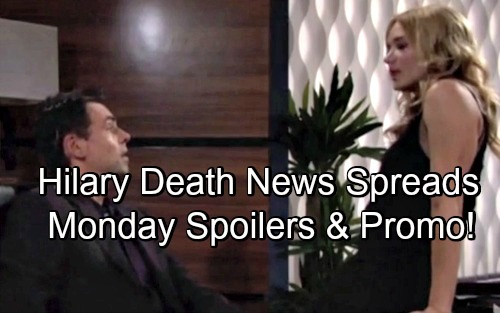 The Young and the Restless (Y&R) spoilers for Monday, July 30, tease that Summer (Hunter King) will shake things up again. She’ll realize Billy (Jason Thompson) and Phyllis (Gina Tognoni) still haven’t made amends, so she’ll choose to stir the pot. Summer will insist that the best way to get over somebody is to get under somebody else. She’ll push Billy to get out there and have some fun.

Of course, Billy may soften and reach out to Phyllis instead. He missed the wedding and didn’t give her any support throughout Hilary’s (Mishael Morgan) ordeal. That seems awfully cruel, especially since Billy caused their relationship issues. Between his gambling and outright lies, Phyllis had some good reasons to be fed up.

However, Phyllis isn’t without fault either! She couldn’t control herself around Nick (Joshua Morrow), so that one-night stand will inevitably come back to haunt her. In fact, it looks like the trouble will start on Monday’s Y&R episode. Kyle (Michael Mealor) knows Phyllis hooked up with another guy, so he’ll be happy to offer reminders. He’ll rev up the pressure and cause some conflict at the office.

The Young and the Restless spoilers say Summer will sense the strange tension. Phyllis will suggest that they’re bickering over some project, but Summer won’t believe that bogus story. She knows her mother better than that!

Summer won’t be able to pry anything out of Phyllis, so she’ll try her luck with Kyle. He’ll respond with a distraction of some sort, but it’ll only hold Summer off temporarily. She’s the kind of gal who doesn’t stop until she gets what she wants. In this case, what Summer wants is the truth. Whenever she ultimately learns the big secret, it should lead to even more “Philly” drama.

Since Hilary (Mishael Morgan) passes away on Friday, the news will spread early next week. Those who were in the loop on Hilary’s condition have already braced for the blow. Nevertheless, it’ll still sting to get the confirmation. The Young and the Restless spoilers say Hilary’s loved ones will have to let go, but it’ll certainly be a painful experience. That’s especially true for Devon (Bryton James).

It sounds like some rough days are ahead in Genoa City. We’ll give you updates as other Y&R details emerge. Stay tuned to the CBS soap and don’t forget to check CDL often for the latest Young and the Restless spoilers, updates, and news.