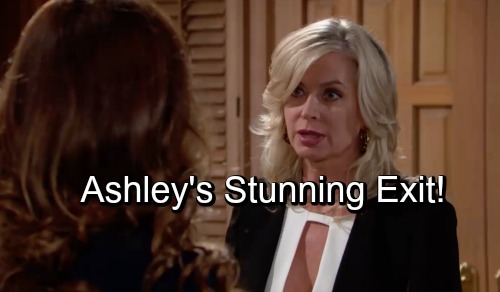 The Young and the Restless (Y&R) spoilers tease that Ashley (Eileen Davidson) will make a bold move soon. Y&R fans know Ashley is a real power player in Genoa City. If an opportunity presents itself, she takes advantage of it. That’s how she ended up turning to the Newman dark side!

Ashley was feeling betrayed by Jack (Peter Bergman) anyway, so she used that as fuel for her career and landed a sweet Newman deal. Now Ashley’s poised to pounce on another major shot. Next week, July 2-6, The Young and the Restless spoilers say she’ll take a risk and hope it pays off.

This could have something to do with Newman’s current crisis, which revolves around Victor’s (Eric Braeden) failing health. He claims he’s fine, but that’s obviously not true. Victor didn’t take enough time to recover before resuming work at Newman. He needs to step away and focus on regaining his strength.

Newman clients are walking since they don’t feel like Victor’s running the show anymore. Nothing will change if ill Victor remains in the spotlight. He may have no choice but to hand leadership over to someone else for a while. Once Victor’s back and stronger than ever, he can start rebuilding Newman’s reputation. Victor can ultimately turn things around, but it’ll require patience and acceptance.

Perhaps Ashley will position herself to fill the CEO spot. Victoria’s (Amelia Heinle) mixed up in the J.T. (Thad Luckinbill) scandal and hasn’t earned Victor’s trust back anyway. As for Nick (Joshua Morrow), he’s made it clear that he wants nothing to do with Newman. Noah’s (Robert Adamson) out of town and Victor seems to view Abby as incompetent.

In other words, Ashley may be Victor’s last hope! Since we now know Eileen Davidson’s leaving The Young and the Restless, this could set up her exit eventually. After Victor returns to the throne, he might offer Ashley a promotion in an overseas division.

Then again, Ashley could impress some other company that scoops her up and pulls her elsewhere. A career move makes sense as a departure tactic in this situation. Regardless, some hot Y&R drama’s brewing. We’ll give you updates as other news comes in. Stay tuned to the CBS soap and don’t forget to check CDL often for the latest Young and the Restless spoilers, updates, and news.