The Young and the Restless Spoilers: Baby Crisis Hits, Lily Rushes Hilary to the Hospital – Miscarriage Devastates Hilary and Devon

BY Marcy Cohen on July 13, 2018 | Comments: one comment
Related : Soap Opera, Spoiler, Television, The Young and the Restless 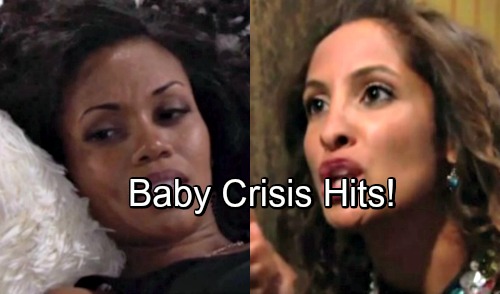 The Young and the Restless (Y&R) spoilers tease that a heated confrontation is on the way. Hilary (Mishael Morgan) and Lily (Christel Khalil) will get each other riled up as usual. Devon (Bryton James) hoped the baby would bring everyone together, but that plan obviously didn’t work out.

Lily and Hilary always find something to spar over, so no one should be surprised that they’re arguing this week. However, the outcome could certainly bring a shocker. It looks like Hilary will suddenly battle intense pain. The stress of this Y&R faceoff could take a toll on her unborn child.

Lily might accuse Hilary of faking it at first. She knows Hilary can be pretty manipulative, so she may act like Hilary’s putting on a show. Unfortunately, the danger to Hilary’s baby will be very real. She’ll soon realize she needs to get to the hospital ASAP. Those cramps the other day were undoubtedly more serious Nate (Brooks Darnell) thought.

The Young and the Restless spoilers say Lily will stick Hilary in the passenger side of her car and hop behind the wheel. There’ll be some tension as they speed down the highway. Hilary may blame Lily for getting her upset and putting the baby at risk. Of course, Lily may fire back that Hilary started it. She may think it’s Hilary’s fault for not being more careful.

Thankfully, the blame game should wind down soon enough. Now’s not the time to point fingers or lash out. Hilary just needs to see a doctor and figure out what’s wrong. She’s desperate to be a mom, so she’ll hope her son or daughter survives this scary ordeal.

Meanwhile, Devon will be called to the hospital. He’ll get over there as quick as he can and beg the staff for updates. Devon should feel helpless as he waits for word on Hilary and their kid. At least he’ll get some support from Neil (Kristoff St. John), Cane (Daniel Goddard) and Lily. They’ll all be stuck in the waiting area while Hilary’s with a doc.

Sadly, The Young and the Restless spoilers say a crushing setback is looming. Devon will eventually be dealt a devastating blow. He’ll embrace Neil as he copes with the bombshell, so it sounds like Hilary will lose the baby. Her doctor may come out and deliver the miscarriage news to poor Devon.

Hilary and Devon may try to tackle their grief together, but this is the kind of thing that could tear them apart. Y&R fans know Mishael Morgan’s leaving the show, so this could be the first sign of her exit story. We’ll keep you posted as other details emerge. Stay tuned to the CBS soap and don’t forget to check CDL often for the latest Young and the Restless spoilers, updates, and news.