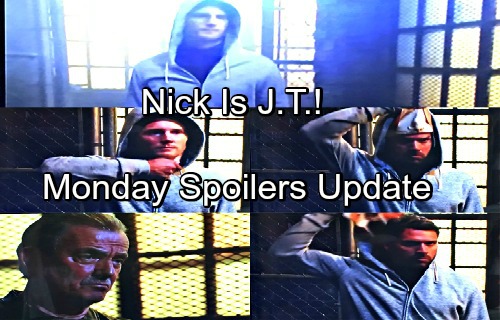 The Young and the Restless (Y&R) spoilers for Monday, July 16, tease that Victor (Eric Braeden) will get quite a shock. In the alley, Vic will reach for the gun in his pocket. “J.T.” (Thad Luckinbill) will ask if Victor intends to shoot his own son. That’s when Nick (Joshua Morrow) will rip off his J.T. mask and explain that he’s behind the Newman sabotage.

Nick will contend that Victor crossed a line by going after Christian (Jude and Ozzy McGuigen). He’ll warn that there’s more to come in their current war. Later, Nick will head home to Sharon (Sharon Case) and talk about their bright future. When Victor stops by, he’ll drop a hint that leaves Sharon puzzled. She’ll realize Nick pulled something sneaky, so she’ll demand some answers.

The Young and the Restless spoilers say Nick will confess to his J.T. scheme. He’ll feel like his actions were justified. Sharon will be appalled since Nick was lurking right outside. He gave Sharon and Nikki (Melody Thomas Scott) a real scare, so it’s clear that Nick really committed to his plot.

Victoria (Amelia Heinle) also suffered through this nightmare, so Sharon will wonder how Nick could do this to his abused sister. He’ll think Sharon should be pleased that he took down Victor, but she won’t even know who he is anymore. Nick and Sharon’s relationship will definitely take a serious hit.

After Phyllis’ (Gina Tognoni) P.I. texts her a suite number, she’ll show up and find Billy (Jason Thompson) gambling. Billy will admit he lost Jaboat and wanted to win it back. He’ll assure Phyllis that he has a grip on things, but she’ll still be furious. Billy will point the finger at Summer (Hunter King) somewhat, which will only make matters worse. Phyllis won’t like that he’s blaming her daughter.

Over with Mariah (Camryn Grimes) and Tessa (Cait Fairbanks), they’ll finish up their movie night. Tessa will briefly sneak away to make a mysterious phone call. She’ll ask the person on the other end if he or she got the money. Afterward, Mariah and Tessa will discuss forgiveness. They’ll talk about how they’ve put the past behind them, so they might as well call this a first date.

Other Y&R spoilers say Neil (Kristoff St. John) and Ashley (Eileen Davidson) will have a make-out session. When Neil suddenly pulls away, Ash will wonder what the problem is. Neil will hint that he’s hesitant to wreck their friendship. He’ll think this romantic evening was a bit impulsive, so they’ll back off for now.

At the Abbott house, Jill (Jess Walton) will rant about Kyle (Michael Mealor) scoring a bone and doing a DNA test. She’ll threaten to sue if Jack opens the envelope. Jack will note that Jill seems awfully scared, so she’ll eventually snatch it and reveal the results herself. It turns out Jack isn’t Phillip’s (Donnelly Rhodes) son.

Jack will be bummed since he thought this was a sure thing. When Dina (Marla Adams) pulls out a photo album, Jack will see some old diary pages. In the entries, Dina only mentions chatting with Phillip, not hooking up.