The Young and the Restless Spoilers: Nick and Phyllis Bond, Shockers Loom – Exes Pulled Closer as Their Relationships Crumble

BY Kinsley Goldman on July 13, 2018 | Comments: one comment
Related : Soap Opera, Spoiler, Television, The Young and the Restless 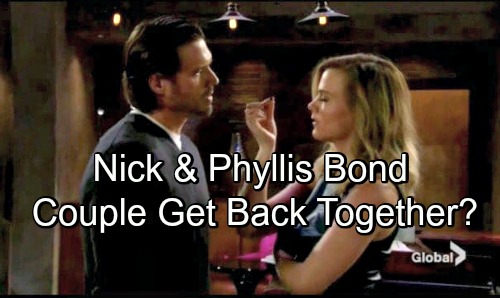 The Young and the Restless (Y&R) spoilers tease that Nick (Joshua Morrow) and Phyllis (Gina Tognoni) will spend some time together. During the week of July 16-20, these exes will bond over some video games. Y&R fans know Phyllis is pretty into gaming. She’s has fun with it, so she’ll enjoy playing against Nick. They’ll share a few laughs and perhaps a deep conversation as well.

Billy (Jason Thompson) has been sneaking around and gambling behind Phyllis’ back. He’ll probably be busy at the poker table, so that may be why Nick sticks around for a video game with Phyllis. They may chat about Summer (Hunter King), who’s finally settling down a bit. That’s something else that could bring Phyllis and Nick closer. As loving parents, they just want their daughter to live her best life.

Of course, J.T. (Thad Luckinbill) will undoubtedly come up during their chat. He’s the talk of the town, so Nick and Phyllis have to address the danger. The Young and the Restless spoilers say Phyllis could get a little uncomfortable thanks to her secrets. However, she’ll push through her worries and keep calm. Phyllis is a pro at hiding things, so Nick probably won’t get any cover-up clues.

The Young and the Restless spoilers hint that Phyllis’ secrets will be safe, but Billy’s won’t. She’ll discover something surprising this week, so that presents some interesting possibilities. Will Phyllis’ private investigator come back with dirt on Billy? Will she do some spying and uncover it herself? One way or another, Phyllis will realize Billy’s been fibbing.

It’s clear that trouble’s brewing for both “Shick” and “Philly.” Sharon (Sharon Case) has lied to her fiancé repeatedly about the night J.T. went missing. She didn’t trust Nick with the truth about the fire poker incident and J.T.’s burial.

Phyllis also lied, but Billy’s gambling addiction could be the bigger problem. It’s setting him up for disaster at Jabot and pulling him closer to Summer. No one would be surprised by a real cheating scandal.

Between the looming shockers and this bonding session, Y&R may be prepping for a “Phick” reunion of some sort. They could at least hook up and make major waves! Do you think that’s what the show’s building toward? We’ll give you updates as other news comes in. Stay tuned to the CBS soap and don’t forget to check CDL often for the latest Young and the Restless spoilers, updates, and news.