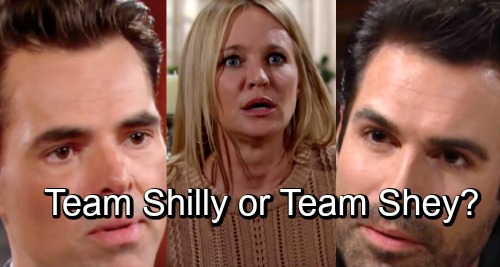 The Young and the Restless (Y&R) spoilers tease that Sharon’s (Sharon Case) love life is about to get messy. Y&R fans know Sharon (Sharon Case) and Rey (Jordi Vilasuso) have been bonding on the job lately. That’s not the best idea since Sharon’s keeping a huge secret, which Rey happens to be investigating. One wrong move and the whole J.T. (Thad Luckinbill) cover-up could explode!

Nevertheless, the heart wants what it wants and Sharon’s is falling for Rey. He’s got feelings for her as well, but Mia (Noemi Gonzalez) is about to make things interesting. Rey’s wife will quickly make it clear that her husband’s off-limits. Sharon and Rey will kiss this week, but Mia will pick up on their vibe and try to drive them apart.

Since Rey’s still a married man, he’ll want to make it work with Mia if possible. That’ll put Sharon at a disadvantage in this love triangle. However, she could actually become part of another one. The Young and the Restless spoilers say Sharon will continue to bond with Billy (Jason Thompson). She’ll even be his plus one at a special Jabot bash.

Of course, the main goal will be to make Nick (Joshua Morrow) and Phyllis (Gina Tognoni) jealous. If “Phick” can flaunt themselves all over town, then Sharon and Billy should do the same. Still, love can take a funny and unpredictable path. In an interview with CBS Soaps in Depth, Mal Young hinted that “Shilly” was at least a possibility. Schemes have a way of bringing people together on soaps!

On social media, many Y&R fans have been commenting on Billy and Sharon’s chemistry. Plenty of viewers actually prefer them to Sharon and Rey. It seems like The Young and the Restless pretty much hired Vilasuso to be Case’s love interest, but that doesn’t mean they won’t take a detour.

Sharon and Billy could at least play around with their connection. Right now, they’re linked through their broken hearts. Maybe that could become a complicated attraction soon enough. The Young and the Restless spoilers say Sharon will keep trying to find the right future, so stay tuned to see how that goes!

Who do you think Sharon should be paired with? Are you still rooting for “Shey” or has “Shilly” caught your eye? Is Rey the best love interest for Sharon or should she give Billy a shot? We’ll give you updates as other Y&R news comes in. Stay tuned to the CBS soap and don’t forget to check CDL often for the latest Young and the Restless spoilers, updates and news.