The Young and the Restless Spoilers: Billy and Summer Destined To Be Together, Break Phyllis’ Heart?

BY Sean O'Brien on July 31, 2018 | Comments: one comment
Related : Soap Opera, Spoiler, Television, The Young and the Restless 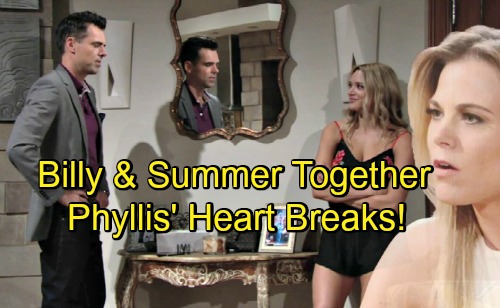 The Young and the Restless spoilers tease that Billy (Jason Thompson) and Summer (Hunter King) are a legitimate potential pairing. Clearly, if that happens, countless Genoa City personalities would go wild, as would various members of the audience. Chief among them, in what would be a full, double verbal beat down, would be the aggrieved party, Phyllis (Gina Tognoni).

Snowflake is long gone. Y&R rewrote the Summer character, transforming her into a troublemaker. That’s what King’s alter ego is right now. She’s not empowered, or living life by her terms. Summer isn’t exploring her inner self, living by her creed, or whatever else that old-fashioned, mumbo jumbo philosophy attempts, or does embody in self-absorbed people through the ages.

Summer has been lying to her mother for weeks. Recently, Phyllis learned that her daughter was aware of Billy’s gambling problem, but had withheld that crucial information. While that secret came out, Summer still hasn’t told her mom that she’s been offering herself to Billy.

While Summer’s initial flirting seemed invented, it may be possible that she was serious all along. Though, considering this juvenile human being’s frame of mind, there’s no telling whether any logical plans were, are, or will be made.

Billy freely chose to start gambling again. So, despite Summer’s intention to lure him back to that lifestyle, thus throwing him off-track and into a purposeful tizzy, Billy made his own choice and then continued to repeat that error. Just as in the past, doing so only leads to downward directions.

Thompson’s character also made a mistake by not immediately telling Phyllis what Summer was trying to do with him. Her tricks couldn’t have continued if he had confronted Summer in front of Phyllis the first time King’s character acted out of line. Yes, Billy has created his own precarious position.

Phyllis will likely be left with no choice but to leave the man she’s come to love. If (when) that happens, Billy will then be single and probably looking to lash back at the woman he loves almost as much as Victoria (Amelia Heinle). Who plays perfectly into that revenge plan then? Who else, but Summer, possibly as intended.

Yes, another go at ‘Villy’ could happen because Vickie is single and Billy will always be the father of her children. Y&R would need to refresh that worn ground if it repairs Thompson and Heinle’s characters. However, exploring the scandalous Silly would provoke countless new possibilities. And soaps are all about fresh takes, which can help to promote audience interest.