BY Kinsley Goldman on July 31, 2018 | Comments: one comment
Related : Soap Opera, Spoiler, Television, The Young and the Restless 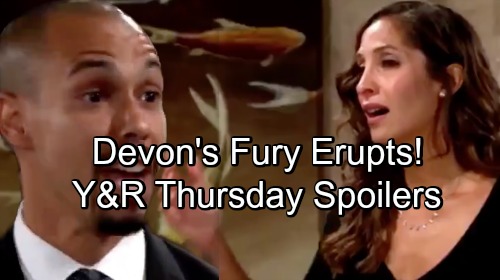 The Young and the Restless (Y&R) spoilers for Thursday, August 2, tease that Victor (Eric Braeden) will have a shocking plan in mind. He’ll deliver quite a surprise to Victoria (Amelia Heinle), so she’ll really be thrown for a loop. Will this be a good surprise or a bad one? Since Victoria was the only child to stick around at Newman, let’s hope Victor will reward for her loyalty!

It turns out Victoria will be a pretty busy gal on Thursday. She’ll also find time to have a crucial chat with Nick (Joshua Morrow). Y&R fans know that Nick played dirty for Christian’s (Jude and Ozzy McGuigen) sake. He impersonated J.T. (Thad Luckinbill), so he owes Victoria a sincere apology.

Nick has no idea that Nikki (Melody Thomas Scott) killed J.T. at the girls’ night bash. He also doesn’t have a clue about the cover-up that followed. However, none of that actually matters here. The point is Nick made his sister think her abuser was back and out for revenge. It was cold and certainly not the kind of thing a loving brother should do.

Nick still won’t be sorry that he fought for Christian, but he’ll realize he needs to truly apologize. He has to make a real attempt at peace, so he’ll take his chance. The Young and the Restless spoilers say Nick will hate that he caused Victoria pain. He’ll promise that all the drama’s behind them and hope she’s willing to let the conflict go.

Fortunately, Victoria will be open to forgiveness. That’s great since there’ll probably be more to fight about soon! As Dark Horse’s battle with Newman heats up, there’s sure to be plenty of clashing. The Young and the Restless spoilers say some big twists could change the game, so stay tuned for some cutthroat moves.

Shauna’s revelation will leave Devon (Bryton James) full of rage. He’ll lash out at Lily and insist that she finally got her wish. Hilary’s out of the picture, so Devon will sarcastically hope Lily’s happy. He’ll accuse her of killing Hilary on purpose, but that’ll just be his anger talking. Lily should’ve been paying more attention on the road, but she never meant for Hilary to die.

Neil (Kristoff St. John) will intervene and call for family unity, but he’ll fail to settle Devon down. Devon’s overwhelmed with grief, so there’s just no taming his fury right now. We’ll give you updates as other Y&R news comes in. Stick with the CBS soap and don’t forget to check CDL often for the latest Young and the Restless spoilers, updates, and news.