BY Heather Hughes on July 31, 2018 | Comments: one comment
Related : Soap Opera, Spoiler, Television, The Young and the Restless 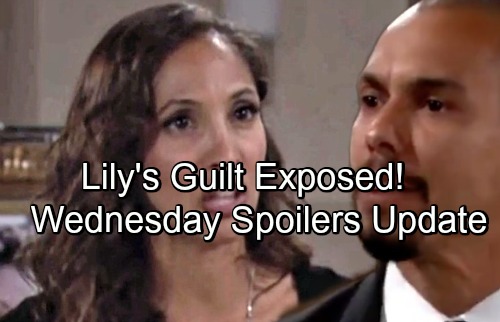 The Young and the Restless (Y&R) spoilers for Wednesday, August 1, tease that Lily (Christel Khalil) will have a sweet chat with Devon (Bryton James). Before the funeral begins, Lily will admit she’s feeling guilty. She’ll regret how hard she was on Hilary (Mishael Morgan), especially since Devon loved her so much.

Devon will remind Lily that she made peace with Hilary in the end. He’ll think she should cling to that. Meanwhile, Charlie (Noah Alexander Gerry) will complain to Cane (Daniel Goddard). He won’t like keeping Lily’s role in the accident a secret. Charlie will be uncomfortable with asking Shauna (Camryn Hamm) to lie, but Cane will believe this is the only way to protect their family.

Later, Devon will gently touch Hilary’s casket. After that somber moment and a tough service, everyone will head back to the penthouse. The Young and the Restless spoilers say the reception will get underway. The guests will take turns sharing memories and making powerful speeches about Hilary.

Devon will talk about how he never stopped loving Hilary. Their intense passion drove them apart for a while, but they were always meant to be. Jack (Peter Bergman) will also reflect on his friendship with Hilary and what a strong person she was. Next, Shauna will sob over the way Hilary took her in. She’ll eventually be settled down by a nervous Charlie.

Once it’s Neil’s (Kristoff St. John) turn, he’ll admit his relationship with Hilary was complex. However, Neil will bring up how wonderful forgiveness can be. He’ll just wish he’d realized that sooner. Finally, Phyllis (Gina Tognoni) will praise her bestie and pull out a surprise note from Hilary herself. The Young and the Restless spoilers say Hilary had a few parting words to leave behind.

Hilary’s letter will include advice for all the key players in her life, but her final guidance will be for Devon. She’ll push him to look to the future and not get bogged down by the past. It’s fine to carry memories, but Hilary will hope those memories can propel him forward.

Soon after, Mariah (Camryn Grimes) will see Mark standing there. Y&R fans will recall that Mariah and Tessa (Cait Fairbanks) were on a date when they spotted Mark with Hilary. Since Hilary called him an old friend, some questions will come up. Mark will tell Mariah that he didn’t know Hilary very well, so she’ll try to get to the bottom of this.

The Young and the Restless spoilers say Devon will join them for the truth. Hilary turned down a great job offer for the sake of her family. That’ll undoubtedly touch Devon as he continues to grieve. However, Devon will also get a bit snappy with Nate (Brooks Darnell). He’ll feel like Nate should’ve been able to give Hilary more help.

Billy (Jason Thompson) will call someone to make sure a plan is fulfilled by the end of the week. When he bolts from the reception early, Phyllis will assume Billy’s going to gamble. Back with Devon, he’ll be stunned after a fight breaks out. Shauna will get fed up with Lily’s innocent act, so she’ll blurt out that Lily ran a red light and killed Hilary.

You can bet Devon’s wrath will be swift and fierce! We’ll give you updates as other Y&R news comes in. Stay tuned to the CBS soap and don’t forget to check CDL often for the latest Young and the Restless spoilers, updates, and news.