The Young and the Restless Spoilers: Y&R Casting New Hilary-ish Role – Sets Up Love Triangle with Nate and Devon 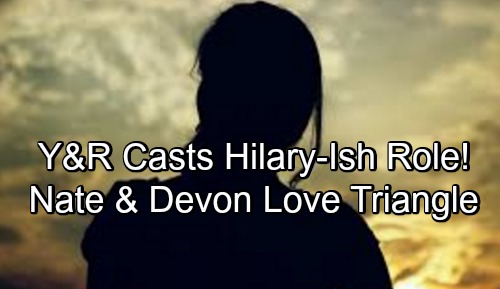 The Young and the Restless (Y&R) spoilers reveal that fans are still mourning over Hilary (Mishael Morgan), but the search for her replacement is already underway. Of course, we’re not talking about a recast. Hilary died on screen, so that makes it less likely they’ll ever undo it. Presumed deaths are easy to fix, but Y&R usually lets the dead-dead stay out of the picture.

That doesn’t mean they won’t bend the rules if Mishael Morgan wants to return one day. If Victor (Eric Braeden) can find Jack’s (Peter Bergman) doppelganger in a Peruvian prison, anything’s possible. They could easily argue that Hilary’s death was faked for some reason.

However, it’s clear that Y&R wants the emotional impact of this loss. For now, Hilary’s gone and everyone in Genoa City will have to move on. With that in mind, The Young and the Restless needs someone to fill the void. They’re looking for an African-American actress in her 30s to play Candace. She’s a brand-new character, but she’ll still be replacing Hilary in a way.

According to Soap Opera Digest, the woman who scores the part will become a series regular. She’s set to start filming by the end of August. The casting call notes that Candace is“a super-smart, confident, kick-ass executive with a background in science from Chicago.”

It also indicates that Candace is quite focused on her career, so she’s not caught up in a husband hunt. She’s strong and independent, which makes her content to do her own thing. Nevertheless, Candace doesn’t rule out love if it comes along. She’s “not opposed to a serious relationship,” which is good since Y&R will inevitably give her one!

There are plenty of characters Candace could be paired up with, but Nate (Brooks Darnell) immediately comes to mind. Since Candace has a background in science, that could put her in Nate’s orbit. He may even summon her to consult on Victor’s (Eric Braeden) case or perhaps someone else’s.

Devon will be grieving for a while, but Candace may catch his eye sooner or later. Maybe he’ll make this a love triangle down the road. Regardless, Candace sounds like a feisty, intriguing character. Let’s hope the show finds someone who’ll fit right in with the cast.