BY hellodrdavis on June 16, 2018 | Comments: 2 comments
Related : Soap Opera, Spoiler, Television, The Young and the Restless 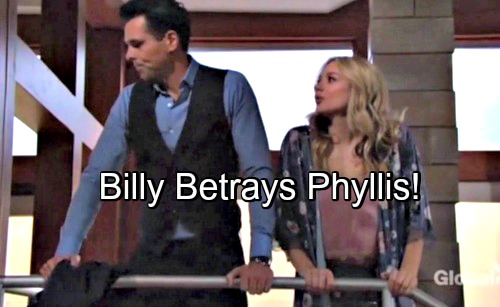 The Young and the Restless (Y&R) spoilers tease that Phyllis (Gia Tognoni) and Billy (Jason Thompson) are in for some trying times ahead. Summer (Hunter King) has exploded onto the scene and is out to make trouble for “Philly” any way she can.

Philly were in a groove before Summer arrived back in Genoa City. They were enjoying their relatively carefree relationship without any real obstacles in their way. Now Summer is back and she’s…well…totally in the way. Philly no longer have the apartment or each other to themselves, and it’s causing stress.

Billy is particularly stressed by Summer, especially since she’s taken to prancing around the apartment in skimpy lingerie and making suggestive comments when Phyllis isn’t around. And it looks like she won’t stop there. Y&R spoilers say that Summer will work to get closer to Billy. This could mean any number of things, but given Summer’s past behavior, she’ll probably start coming on stronger to Billy. She seems determined to get Billy into bed!

So far, Billy has been strong in resisting Summer, but that could change in a heartbeat, especially if she turns up the heat. Y&R spoilers say that that Billy will succumb to temptation, and that Summer and Billy will share a secret. Uh oh! Will the two end up sharing a kiss, or will it be more? Summer might proposition Billy after he’s had a few too many drinks. If so, watch out!

Or the secret could be about something more mundane, such as what Summer went through when she was away from Genoa City. But even so, it will still be something kept hidden from Phyllis, which will suit Summer just fine. She’s all about deceiving her mother these days, and nothing would make her happier than to drive a wedge between Billy and Phyllis. Phyllis won’t be happy to learn she’s been left out in the cold, and this could unravel Philly.

What kind of trouble will Summer cause for Philly, and what is the big secret that Summer and Billy will keep? Will Philly weather this storm? Stick with the CBS soap and don’t forget to check CDL often for the latest Young and the Restless spoilers, updates, and news.