The Young and the Restless Spoilers: Billy Brokenhearted After Phyllis’ Secrets Explode – Victoria Reunion on the Horizon?

BY Heather Hughes on October 3, 2018 | Comments: one comment
Related : Soap Opera, Spoiler, Television, The Young and the Restless 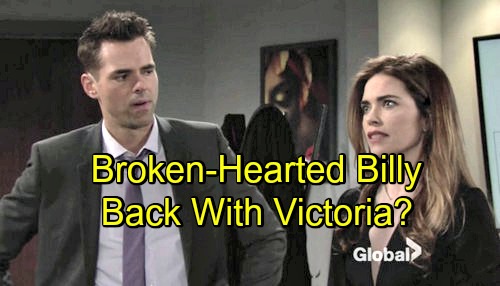 The Young and the Restless (Y&R) spoilers tease that Billy (Jason Thompson) has some heartache headed his way. Of course, he’ll inevitably battle some anger as well. Phyllis (Gina Tognoni) has been hoping to put the one-night stand drama behind her, but that may not be possible. Now that Sharon (Sharon Case) knows, it won’t be long until Billy knows, too.

Unfortunately, the timing is pretty horrible. Billy’s already been struggling with his gambling addiction. He stole $500,000 from Jabot, which forced him out of the CEO spot. Billy’s set to do a rehab stint soon, so he’s not at the top of his game. He’s in a fragile state emotionally, which could make this revelation even more crushing.

To make matters worse, Phyllis and Billy are finally solid again. That seems like a good thing on the surface, but it’ll actually add to the pain of the truth. Billy’s gambling came between them for a while, but they managed to work through their issues. Phyllis just wants a better life for Billy, which he now understands. She doesn’t like to see Billy drowning in debt and stress all the time.

In Wednesday’s Y&R episode, Billy hints that he wants to marry Phyllis. She’s taken aback and pushes for clarification, so Billy admits that it was a proposal. Since Billy wants to get engaged, that says a lot about his great love for her. It’s going to be devastating when he learns what Phyllis has been hiding.

They were on a break when Phyllis slept with Nick (Joshua Morrow), but that probably won’t make a difference to Billy. He’s got a hot temper and jealousy issues when it comes to Phyllis’ exes. If the J.T. (Thad Luckinbill) secret also comes out, that could really seal the deal on this breakup. Billy may feel like he can’t trust Phyllis to be honest about anything at all.

Phyllis has two great options for her next pairing. She could get back together with Jack (Peter Bergman), which seems very likely. Nick could be another option since his relationship with Sharon will explode eventually. What about Billy? There aren’t two many single ladies for him to choose from around town.

The Young and the Restless is pushing Victoria (Amelia Heinle) and Nate (Brooks Darnell) closer, but plenty of fans just aren’t feeling it. Maybe the show should shift gears and let Victoria reunite with Billy instead. Those two always tend to find their way back to each other. Victoria’s been expressing concern for Billy lately, so it’d be easy to set the reunion in motion.

Naturally, Billy could enjoy a hot hookup with Summer (Hunter King) beforehand. Once he’s got that out of his system, he could go for a more mature relationship. Perhaps Victoria is just what Billy needs right now. Even if Billy and Phyllis work it out down the road, Y&R may want to do “Villy” in the meantime.