The Young and the Restless Spoilers: Billy Romances Phyllis With Jabot Power In Mind 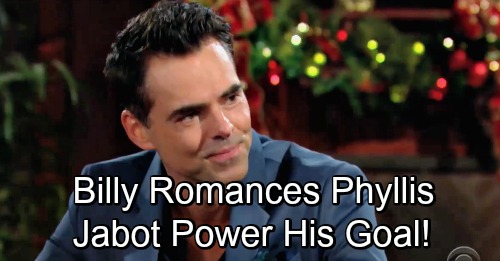 The Young and the Restless spoilers tease that Billy (Jason Thompson) might convince himself that he’s not angry at Phyllis (Gina Tognoni) any more. But he is and that partially drives his attempt to romance Red in order to eventually take back Jabot power.

Oh, Billy will tell Jack (Peter Bergman) that he’s not over Phyllis. And what Billy relays to his brother, who also still loves Phyllis himself, will be true.

For her part, Phyllis will remain leery of whatever Billy proposes. She’ll know that Billy’s infamous charm could merely be a ruse, projected with the intent of somehow knocking her off Jabot’s Chief Executive Officer’s chair. However, she’ll play along.

Both people in this cat and mouse game do actually care for the other. They share similar sneaky and snarky personality points. Those elements within their minds are partial reasons why Billy and Phyllis initially bonded. But those moral rough patches are also reasons why Philly’s relationship path was as thin as early December ice on a pond in Chancellor Park, near to the spot where J.T. (Thad Luckinbill) was originally buried.

Y&R fans who believe that Phyllis belongs with Jack are likely right. Yes, the head of Jabot would probably regain a far more stable life if she went back to Jack, or even remarried him. He likely wouldn’t do to her what Billy recently did. However, love isn’t a set of rational decisions and Phyllis isn’t at a place in her life where she’s even considering settling, which is what Jack would represent.

So Billy will be Billy. And Phyllis will allow him in, at first to keep an eye on him.

Phyllis isn’t really into Nick (Joshua Morrow), even though she’s living at what should be the Shick house. The Phick revival seems destined to drop at some point before the holidays, but maybe this faux couple will survive into mid-winter. In any regard, that duo won’t prevent Phyllis from allowing Billy to tease her at work.

Kyle (Michael Mealor) was all-in for Billy’s plan to meet up with a hot shot executive as part of a plan to impress the Jabot board. Kerry (Alice Hunter) caught soapy wind of the executive’s meeting with Jabot though a non-friend of a friend and just so happened to pass the information along to Phyllis, who called out Billy.

Knowing that Billy is alone, Phyllis will be manipulating the younger Abbott brother just as much as he is working her. Quite the one-time couple, huh?

As is true with many daytime scripts, a J.T. point was purposely inserted above. That tease was intended to link to this open plot point about Phyllis. Her time as Jabot CEO will likely end if she’s ever outed as being part of the coverup crew.

As long as Billy has positioned himself well enough, he just might be able to win another board vote and reclaim his lost power. Though his clever nephew will be ready to pounce as well and Jack will still be available.