The Young and the Restless Spoilers: Wednesday, December 5 – Nikki Must Choose – Victoria and Cane Team Up – Abby Presses Her Luck 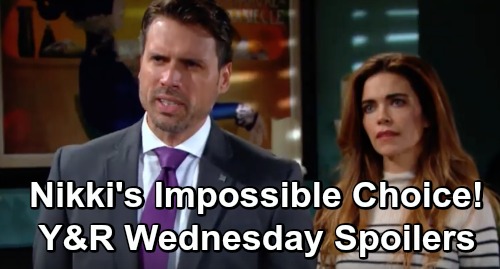 The Young and the Restless (Y&R) spoilers for Wednesday, December 5, tease that Nikki will wrestle with a familiar battle. She’ll face some inner demons that she’s never truly been able to rid herself of. It sounds like Nikki may be tempted to drink again, which wouldn’t be surprising under the circumstances.

Let’s consider what Nikki’s up against as of Tuesday’s episode. The stables were set on fire as a clear message, Rey (Jordi Vilasuso) is closing in on the truth about J.T. (Thad Luckinbill) and Victor (Eric Braeden) has suddenly disappeared. It’s no wonder Nikki may be drawn to the bottle for comfort on Wednesday’s new Y&R episode.

Will Nikki cave in or could a loved one step up in the nick of time? Either way, Y&R spoilers say Nikki will remain on edge. Her biggest concern will be Victor and his whereabouts. Nikki will fret as she imagines all the horrible things that might’ve happened to her husband. Since a fire just broke out at the ranch, Nikki won’t think Victor disappearing right now is a coincidence.

While Nikki hopes for good news, Victoria (Amelia Heinle) and Cane (Daniel Goddard) will team up. They’ll collaborate on a project of some sort, so it should be interesting to see what they have in store. Victoria may welcome the distraction from all the cover-up chaos and the drama within her family. She’s been stressed out for months and it’s only going to get worse from here.

Other Young and the Restless spoilers say Abby (Melissa Ordway) will take another huge risk. She’s been gambling a bit in business lately and so far, it’s paid off. Of course, Abby’s string of fortune decisions may not last indefinitely. Abby will press her luck on Tuesday, so this risk may not turn out all that well for her. She could be poised for a major fall if she’s not careful.

It’s also possible Abby will take a personal gamble instead of a professional one. This could have something to do with keeping Arturo (Jason Canela) close and shutting Mia (Noemi Gonzalez) out. That could still backfire since Mia’s such a troublemaker. It may be a mistake for Abby to provoke Mia’s wrath!