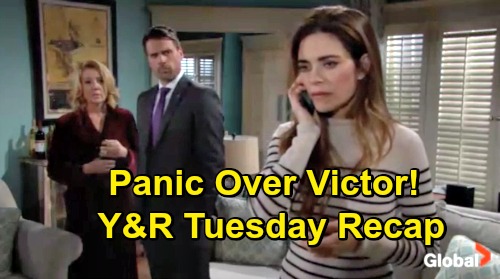 The Young and the Restless (Y&R) spoilers update and recap for Tuesday, December 4, tease that Nikki (Melody Thomas Scott) and Victoria (Amelia Heinle) will be concerned over the blaze at the stables. As they watch the flames, Rey (Jordi Vilasuso) will appear and let them know the horses are fine. He’ll think it’s best if they leave the property for the night and let the cops investigate.

Meanwhile, Ana (Loren Lott) will push Devon (Bryton James) to open up about Shauna (Camryn Hamm). She’ll sense that he needs to talk, but he’ll just snap that he’s going out for the night. At Mariah (Camryn Grimes) and Tessa’s (Cait Fairbanks) place, they’ll read in bed with plenty of tension. Tessa will try to start a conversation, but Mariah’s short responses will make it impossible.

After Mariah turns over to sleep, Tessa will give up and switch off the light. The next morning, Mariah will be out of the apartment before she Tessa awakens. Across town, Victoria and Nikki will discuss their fire fears. They couldn’t sleep since they were worried about all the drama, including Rey’s digging.

Nikki will confess that she hasn’t been able to get in touch with Victor (Eric Braeden). She’ll feel like he’s simply disappeared. Soon after, Nick (Joshua Morrow) will arrive with some updates. He’ll reveal that the fire’s out, but the stables have been destroyed. Nikki will hope the wiring was faulty since the alternative is too grim to think about.

Later, Nikki will panic when her emails to Victor bounce back. After she calls Vic’s cell phone again, she’ll realize it’s out of service. Y&R’s mystery of missing Victor should provide some interesting twists! In the meantime, Nate (Brooks Darnell) will give Devon (Bryton James) a hangover cure. Then, it’ll be Ana’s turn to try talking to him again.

Ana will suggest that she hasn’t experienced the same kind of loss as Devon, but she understands what it’s like to lose your passion. That’s how she was about music for a while. Devon won’t think Ana really gets it. He lost the love of his life and their baby, so it’s not like he can pick up where he left off.

The Young and the Restless spoilers say Ana will offer some advice. She’ll think Devon needs professional help, so he’ll decide to see a shrink. At Jabot, Fen (Zach Tinker) will try to charm Lola (Sasha Calle). When she doesn’t take the bait, Ted the assistant will explain that Lola has a boyfriend.

At Crimson Lights, Mariah will turn to Kyle (Michael Mealor) for advice. She’ll confess that Tessa did something bad and broke their trust, but she’ll refuse to give specifics. Mariah will feel like she just keeps going back for more lies and pain, but she won’t be sure why. Kyle will point out that Mariah’s in love. He’ll try to provide more guidance, but Mariah will mostly end up venting instead.

Afterward, Fen will come around looking for a reunion with his crew. He’ll push Kyle’s buttons over Lola, who’ll show up for some serious PDA with her beau. Fen will get the message, but add that he’ll be waiting when Kyle screws up.

Mariah will also be pestered about Fen’s music demo and his desire to get on Devon’s label. She’ll offer to listen to it and maybe let Fen play on GC Buzz, but he’ll think the late-night circuit is more his scene. On her way out, Mariah will bump into Tessa. She’ll turn down Tessa’s request to have coffee together and dash off to work.

Back at Victoria’s place, Rey (Jordi Vilasuso) will deliver big news. After he explains that they’re dealing with arson, he’ll learn the Newmans haven’t heard back from Victor yet. Once Rey exits, Nick will battle worries about the detective. He’ll get the feeling that Rey knows more than he’s letting on.