The Young and the Restless Spoilers: Billy Uses Summer For Revenge On Nick

BY Sean O'Brien on August 20, 2018 | Comments: one comment
Related : Soap Opera, Spoiler, Television, The Young and the Restless 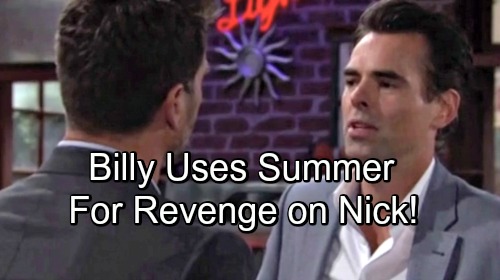 The Young and the Restless spoilers tease that Nick’s (Joshua Morrow) plan to squeeze Billy (Jason Thompson) will result in an unexpected boomerang response. The referenced holding company Nick plans to purchase will give him control over Jabot’s worldwide headquarters in Genoa City, which will be coupled with the formation of Silly.

Silly is the mashed couple’s nickname that Summer (Hunter King) is trying to force into existence. While her plan initially seemed preposterous to Nick and to longtime viewers, converging factors are now making the storyline where she and Billy become a duo increasingly possible.

Nick has morphed into another version of Victor (Eric Braeden). He decided to turn dark after his father tried to take custody of Christian (Jude and Ozzy McGuigen). That drama transpired after Nick approached Victor about returning to the fold at Newman Enterprises.

Generally, the acceptance of one’s request to work at a high level position in a worldwide conglomerate, especially when that company is family owned, is followed by gratitude. But Nick didn’t like that Victor wanted him to fill the Chief Executive Officer’s role because Vickie (Amelia Heinle) believes she’s entitled to it, forever.

Blood and the word entitled dually link Nick and Vickie, who has since made nice with her dad. She rejected Nick’s request that she join his emergent company, Dark Horse, which was founded in duplicity, along with acts of personnel, intellectual property, and identity theft. Yet, Nick fully believes that he’s morally superior to the Moustache.

Summer didn’t consider how her dad would react to the presumed Silly, when it happens, but would likely expect resistance after the fact. Now, Nick has unknowingly set a tripwire which will cause Billy to fall into Summer’s arms.

Philly appears nearly over. Phyllis (Gina Tognoni) is about to learn on Tuesday’s new Y&R episode, August 21, what Phick’s daughter has been up to and will only need to push one of Billy’s buttons to create a payback response. The instant he learns what Phyllis and Nick did, which will surely come through Summer’s words, he’ll likely use her lips as revenge.

Billy may not realize by that point in the plot just how much power Nick recently gained, which will make his business and love life miserable. Regardless, Summer will then become a weapon Billy can use against both Phyllis and Nick.