BY Olivia Marie on August 20, 2018 | Comments: one comment
Related : Soap Opera, Spoiler, Television, The Young and the Restless 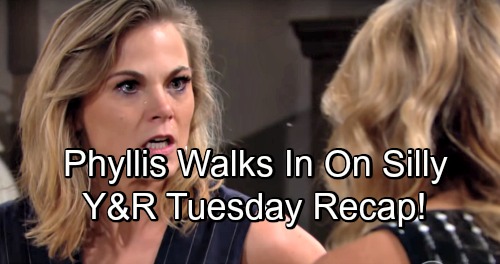 The Young and the Restless (Y&R) spoilers for Tuesday, August 21, 2018 reveal Lauren (Tracey E. Bregman) finds Kyle (Michael Mealor) at the coffeehouse. She demands a frank conversation with him; first, she wants to know what Billy (Jason Thompson) intends to do with Fenmore’s wondering where his loyalties lie as his previous actions prove he is only loyal to himself; but she likes his attitude and wants him in her corner.

He doesn’t think she needs another partner as she has Phyllis (Gina Tognoni), but Lauren isn’t so sure since she’s involved with Billy, whose schemes could spell trouble for her family legacy.

Nate (Brooks Donnell) attempts to get to know Victoria (Amelia Heinle), but she wants nothing to do with him. Later, Victor (Eric Braeden) comes to see Victoria in her office, singing praises about Nate and all his medical help. He suggests she gets to know him better.

During the meeting, Victor doesn’t really consider Dark Horse to be competition. He shares with Victoria that he hopes Nick (Joshua Morrow) succeeds with the company, in hopes that Newman Enterprises will eventually acquire it forcing Nick back into the family business. Victoria warns him Nick will be furious as this will just be Victor’s way of controlling his son.

Nikki (Melody Thomas Scott) arrives at the GCAC, where Rey (Jordi Vilasuso) bumps into her; she swears she doesn’t know him, but he sits at the bar watching her. Nate comes in a short time later, informing Nikki him and her neurologist are happy with her progress.

He then questions her about Victoria, certain something in her personal life is causing her a lot of stress. Nikki won’t reveal any information to the doctor other than she had a rough time with her ex, JT (Thad Luckinbill). As soon as he leaves, she calls Victoria who promises she will handle Nate herself!

At home, Billy spills his coffee all over Summer (Hunter King), who quickly removes her top. She feels this is exactly how Billy wants her as he is suspicious on whether she did this on purpose. Phyllis returns home and catches Summer standing in only a bra with Billy.

She demands Summer put a shirt on and questions Billy about what really happened, even after both said it was an accident. Phyllis reveals her suspicions to Billy, who at first, saying Phyllis is crazy to think Summer is up to anything; but later admits Summer is a flirt, but tries to convince her to not let Summer get to her.

Billy reveals to Phyllis that he is going to Philadelphia for the trade show, and Nick purchasing the leasing company is nothing more than an annoyance. The two arrive at work and as Phyllis takes a quick phone call, Billy spots Summer spying on them. To make his point clear to Summer, he suggests to Phyllis that they play hooky. She agrees, unaware that Summer witnessed the whole exchange and is furious.

Up on the rooftop, Billy spends time reassuring Phyllis that Summer will never been an issue for them; when she isn’t convinced, Billy feels its time they get out of Summer’s place and get one of their own.

Summer informs Lauren about the trade show, suggesting she let Summer go so she can prove her loyalty to Lauren. Initially Lauren agrees, but quickly changes her mind, since she is CEO of Fenmore’s it would be better for her to go and keep an eye on Billy herself. Lauren thanks Summer for the tidbit about the trade show and leaves.

Summer isn’t pleased and books a flight and hotel room in Philadelphia after she calls to find out what room Billy will be staying in while there. Summer lets Kyle in on her plan to seduce Billy. He feels Billy won’t fall for her games, but she strongly disagrees. Kyle gets a call from Mariah (Camryn Grimes) who admits she is not okay and needs to talk.

Back at Crimson, Mariah reveals everything about Tessa (Cait Fairbanks) and Kyle agrees with Devon (Bryton James), even saying he will pay for the private eye to find Tessa. Kyle tells Mariah about the predicament with Summer and how obsessed she is with this man, not revealing it is Billy.

He confesses that he still has feeling for her, but now that Summer has raised the stakes – no longer playing by the rules; he feels he can do the same!

Victoria goes to Nate’s place, confronting him on talking to her mother about her. She tells him he was out of line as she isn’t one of his patients. He wants to help, wanting to know why she is so stressed but she angrily tells him to back the hell off and storms out of his apartment.

Rey spots Victor join Nikki at the GCAC and joins them. He claims to be someone who admires their charity work, asking to take a selfie with them. They pose with him and he retreats back to the bar, where he scrolls through the photos on his phone, all of them being Newman family members, including Nick’s ex-wives Sharon and Phyllis.