The Young and the Restless Spoilers: Billy Wants Phyllis Back – Confides in Jack That The Passion’s Still Alive

BY hellodrdavis on December 2, 2018 | Comments: 2 comments
Related : Soap Opera, Spoiler, Television, The Young and the Restless 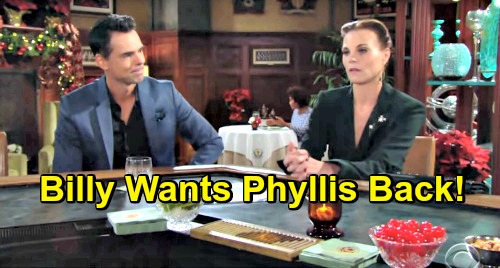 The Young and the Restless spoilers tease that Billy (Jason Thompson) is starting to realize that moving on from Phyllis (Gina Tognoni) isn’t as easy as he thought it would be. After Sharon (Sharon Case) let the world know that Phyllis and Nick (Joshua Morrow) had slept together, Billy immediately dumped Phyllis and slept with Summer (Hunter King) for revenge.

Everything happened quickly, and then Billy was off to gambling rehab for a while. But he’s now finding that the “clean break” from Phyllis perhaps wasn’t so clean. He and Phyllis have to work together and interact on a daily basis in their respective capacities at Jabot. And lately, they’ve been working closely.

While working on a big pitch together, the two of them reconnected, albeit in a professional way. But it reminded each of them just how good they used to be together. Billy in particular felt something for Phyllis, and it looks like that feeling will only grow.

According to The Young and the Restless spoilers, Billy will confide in Jack about his lingering feelings for Phyllis on a new Y&R episode this week, December 3-7. It seems that after all the anger and rage over Phyllis’ affair died down, Billy realized that his deep love for Phyllis was still there. He and Jack will chat about the situation, and Billy will admit that he wants Phyllis back.

Of course, a reunion isn’t so likely because there are various obstacles in their way. Phyllis has moved in with Nick, and she’s probably never going to get over Billy’s sleeping with Summer, no matter how much time passes. Plus, Phyllis is now Jabot’s CEO, and Billy’s got a secret agenda to oust her asap. It would be difficult for them to reconnect under these circumstances.

Still, it’s possible that the two could wind up back together at some point. Do you want to see Billy and Phyllis back together? Stay tuned to the CBS soap and don’t forget to check CDL often for the latest Young and the Restless spoilers, updates, and news.